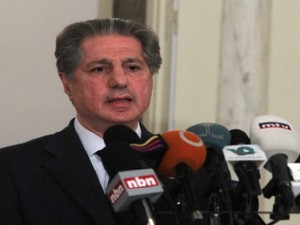 Kataeb Party leader Amin Gemayel warned Monday that any attempt to change the political system would not be in the favor of Christians, as he rejected to be “subservient to Hizbullah.”

“It's about time we all thought of the country's interest and resorted to the democratic, parliamentary procedure,” said Gemayel at a seminar titled Liberate the Presidency.

He noted that the presidential vacuum which has been protracting for more than a year now is “premeditated” and that some parties “have a strategic interest in impeding the election of a president.”

“There was a decision to empty the state from its institutions and now there is a decision to vacate the presidency,” Gemayel pointed out, cautioning that “any system change will not be in the favor of Christians.”

Accordingly, he called on the parliamentary blocs boycotting electoral sessions to “declare their real goals.”

The rival political camps have so far failed to elect a successor to Michel Suleiman, whose term ended on May 25, 2014, although around 23 voting sessions have been held. The MPs have not met the two-thirds quorum required to hold an electoral session.

Separately, Gemayel hit back at remarks by Hizbullah chief Sayyed Hassan Nasrallah on the fight against Syria-based extremist groups.

He noted that Hizbullah “made a strategic achievement” through its military advances in Syria's Qalamoun region near Lebanon's border while pointing out that “this achievement is in the favor of certain countries and axes and at the expense of Lebanon and its sovereignty and unity.”

“If the achievement is not Lebanese, it will be destructive for Lebanon,” warned Gemayel.

“I also refuse to be protected by anyone other than a strong state and its army and security forces,” Gemayel added.

On Sunday, Nasrallah noted that if the regime and Hizbullah win in Syria, they would “represent the guarantee for all Lebanese,” warning that al-Mustaqbal movement and its leaders would be “the first victims” if the IS and al-Nusra groups take a foothold in Lebanon.

Addressing Lebanon's Christians, Nasrallah asked: “Who will protect your women from enslavement and your churches from destruction?”

But Gemayel stressed Monday that “the protection of Lebanon should not be confined to a certain group without the others.”

“Kataeb and Hizbullah must be one hand in the face of the entire world … but the Sunnis are the ones fighting Sunni fundamentalism in Lebanon more than anyone else, so let no one boast that they are better than others,” Gemayel added.

It seems that you are finally understanding the dangerous plan of Ebola and their dog the Caporal.

Gemayels ignorance will be his doom, I just hope his Christian followers along with Geageas will wake up when the time comes.

they have and they have started to smell the rozes and the problems that Iran and Kizb are placing Lebanon into. This is the first time I have ever agreed with Jumayil on anything at least he is thinking of Lebanon and not Iran!

Mystic habibi, most of the Christians have woken up a long time ago. As in every principle of life, in waking up, some are early risers, others are late risers. If you look at the convoys that are going to Rabieh to visit the notable rabbit resident there, or better known as Aoun the claoun, you will notice that the convoys are seriously reduced, I mean seriously. So what does that tell you? You do your sums brother, you're smart, you should know how to separate fact from wishful thinking.

No thanks to the filthy murdering militia

"represent the guarantee for all Lebanese". I think Hassan took it too far. I understand we do not want ISIS to win. I get it. However, we need one army in Lebanan, and no militia. Unless HA is saying we all need our own militia. OR is Hassan saying that nobody can have a militia except them, and we are to be protected by them?

he won't like reading this article from the business time http://www.ibtimes.com/christians-threatened-isis-lebanon-turn-hezbollah-help-1889610
:D