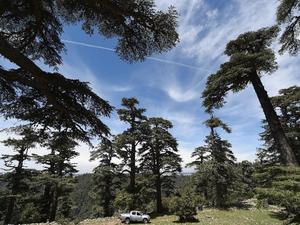 The cedar tree, considered by many to be Morocco's national treasure, is coming under attack from climate change, greedy humans who indulge in illegal logging, and monkeys.

The noble conifer Cedrus Atlantica covers about 134,000 hectares (330,000 acres) of the North African country. Although less well-known than its Lebanese cousin Cedrus Libani, the Moroccan cedar is still a potent symbol of national pride.

The cedars cover vast stretches of Morocco's mountainous Middle Atlas, near the town of Azrou.

It is these rugged slopes that are home to a rare and iconic cedar, named after World War I French general Henri Gouraud, who was stationed in Morocco to take charge of colonial troops.

A key tourist attraction, the Gouraud cedar stands 42 metres (140 feet) tall and is 900 years old, with one distinctive branch that juts out like a candelabra.

"It is really beautiful, like being in Switzerland," said Badreddin, a recent visitor from Tunisia.

The area is a trekker's paradise, and home to local monkeys known as Barbary macaques, as well as sheep and goats, which have in recent decades had to change their eating habits due to waves of drought.

The monkeys are known to feed on plants and insects, and enjoy peanuts that visitors throw their way.

But experts have noted that in recent years the monkeys have been forced to alter their diets, chewing on bark to boost their calcium intake and nibbling small branches that sprout from the cedars.

Like the region's 800,000 sheep, goat and cows, the animals have become more and more sedentary due to water shortages that have led to deforestation.

"Water shortages compounded by the behaviour of the animals are contributing to the withering of the cedars," said Abderrahim Derrou, the director of the Ifran national park in the region.

The park was set up a decade ago in the Middle Atlas as part of a project to regenerate the forest and protect its fragile ecosystem. Hundreds of young cedars can today be seen sprouting skywards throughout the region.

Morocco is also working on plans to secure the "endangered species" label for its cedars and a "world heritage" mention from UN cultural body UNESCO.

In the meantime, authorities have set up a plan to limit areas where cattle can graze as part of efforts to protect the forest.

"If the forest goes, everything will disappear. The people here know that very well but life here is tough," said a shepherd in Ain Leuh forest, one of the region's most ecologically important.

Even if the price drops on the black market, the wood is still highly valued.

Earlier this month local media reported that a forestry department official was killed in a car accident as he gave chase to poachers.

The fragrant wood is a favourite of cabinet makers and essential oil produced from it is said to have medicinal benefits, as well as being used in aromatherapy.

"This wood is gold," said Miloud Bouyekhf, insisting that he, like others, respects the law and would only cut down trees that had been designated for felling by the forestry department.

"Even sawdust is used," the woodcutter said as he headed into the forest with a chainsaw, vowing he would abide by the rules.

Illegal logging takes place under the cover of darkness, when poachers plunge their saws into trees that are hundreds of year old.

Abderrahim Houmy, secretary general of the High Commissioner for Water, Forests and the Fight against Desertification, said that while illegal logging is damaging, in constitutes a minor threat to Morocco's cedars compared to the grave danger posed by climate change.

"Climate change is the real threat," he said, adding that rises in temperature, droughts and flooding could spell doom for the cedar if nothing is done soon to protect the Biblical tree.