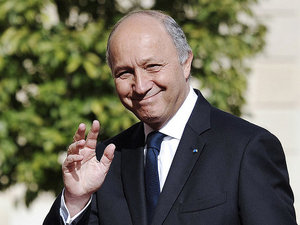 Despite "extremely complex" issues, the political mood for reaching a global climate deal this year is stronger than ever, says French Foreign Minister Laurent Fabius.

Fabius, who will help steer the U.N. conference in Paris, said world leaders, supported by business chiefs and the public, were more resolved than ever to tackle climate change.

"The tone is positive, but at the same time the difficulty (of reaching an agreement) is extreme," Fabius said in an interview with news agencies in Paris on Friday.

And, he cautioned, an accord would not halt the climate juggernaut at a stroke, but instead mark "the start" of a fresh process -- "a new deal."

The November 30 - December 11 parlay will bring together 196 parties to the U.N. Framework Convention on Climate Change (UNFCCC).

The last time the world community tried to forge a climate pact was in 2009, at the notorious Copenhagen summit.

The meeting was so ill-tempered and chaotic that even today, some of the wounds it inflicted on the negotiation process remain unhealed.

Fabius agreed that what he called "the Copenhagen Syndrome" was a problem, but argued there were grounds for optimism.

"The first reason for this is that, sadly, the climate situation has worsened," he said. "The need to find political agreement is even stronger than before."

He paid tribute to China and the United States, the world's two biggest carbon emitters, for a bilateral deal to curb greenhouse-gas pollution.

Fabius also said scientific evidence had all but silenced those who contested climate change or who argued that humans were not to blame for it.

"At meetings these days, no-one challenges the reality of the phenomenon."

And, he added, there had been a dramatic change among businesses, "which are now very sensitive to the problem, and many of them have become very pro-climate."

Fabius warned though of "the extremely complex" issues that lie ahead.

If approved, the deal will be the first agreement to bring all the world's nations under the same commitment regime.

Taking effect from 2020, it would seek to limit global warming to no more than two degrees Celsius (3.6 degrees Fahrenheit) above pre-industrial levels.

But a new round of talks, starting in Bonn on June 1, faces some massive tasks.

Chief of them is to slim a sprawling 80-page draft blueprint -- a consensus document incorporating every viewpoint -- into something manageable.

And so far, out of the 196 UNFCCC parties -- 195 countries plus the European Union -- only 38 have contributed to a roster of carbon-curbing pledges that is supposed to be the beating heart of the future agreement.

Among the major emitters, submissions have been made by the United States, the European Union, Russia and Canada, but not by China, Australia, Brazil, India and Japan.

Fabius said he expected more pledges in June and again in September, when there will be a special session on climate change at the U.N. General Assembly meeting in New York where top-level meetings are likely.

He said he was particularly reassured by China, where he has made repeated visits.

"The Chinese are achieving great things" on climate change, he said. "I am sure that what they will achieve in reality will go beyond their commitments."

The organisation of the Paris conference is pushing ahead on several fronts. The goal is to ratchet up interest by the public and green promises by business so that they boost the impact of a political deal.

France was mulling whether to invite heads of state and government to attend the talks, "to provide a positive political message," Fabius said.

But, he stressed, this would be at the start of the conference and not at the end, as was the case in Copenhagen where stunned leaders jetted in to find the situation catastrophically deadlocked.

"Our approach seems reasonable and seems to satisfy everyone," said Fabius.

Any decision to push ahead with the idea would be made by French President Hollande in conjunction with U.N. chief Ban Ki-moon, in the wake of the U.N. General Assembly, he said.