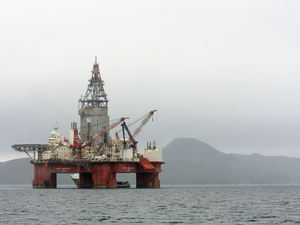 Fjords from Alaska to Norway soak up potentially damaging carbon from the atmosphere, making the steep-sided inlets an overlooked natural ally in offsetting man-made climate change, a study showed on Monday.

Fjords cover only 0.1 percent of the world's ocean surface but account for 11 percent of the organic carbon in plants, soils and rocks that gets buried in marine sediments every year after being washed off the land by rivers, it said.

The cliff-sided inlets, carved out by glaciers in successive ice ages, rank "as one of the ocean's major hotspots for organic carbon burial, based on mass of carbon buried per unit area," a U.S.-led team of scientists wrote in the journal Nature Geoscience.

The findings add to knowledge about how carbon, a vital building block for life on Earth, cycles through nature and could help to combat man-made climate change. In its airborne form, carbon dioxide is the main man-made greenhouse gas blamed for stoking global warming.

Fjords are especially good at storing carbon because they are deep, receive heavy flows of carbon-rich water from rivers, and have calm, oxygen-starved waters in which carbon quickly sinks without bacteria breaking it down.

Worldwide, fjords absorb an estimated 18 million tonnes of carbon a year, according to the study that looked at fjords around the world in Nordic nations, Greenland, Canada, Alaska, Chile, New Zealand and Antarctica.

"Fjords have largely been ignored" as places where large amounts of carbon are stored, according to the scientists led by Richard Smith at Global Aquatic Research LLC in New York state.

Plants soak up carbon dioxide from the air and use it to build roots, stems, trunks and leaves. When they die, the carbon either gets buried in soils, washed into rivers or released back to the atmosphere as vegetation rots or burns.

Understanding the role of nature in absorbing carbon is vital to predict the impact of man-made greenhouse gases, released by burning fossil fuels in power plants, cars, homes and factories.

"Despite being small, fjords are mighty," in soaking up carbon, Richard Keil of the University of Washington, who was not involved in the study, wrote in a commentary in Nature Geoscience.

"Despite decades of effort, we still lack a full understanding of organic carbon burial," he wrote.