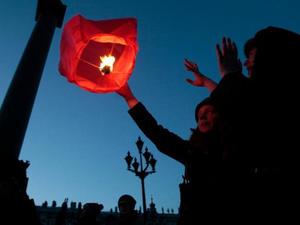 It’s been a world superpower for most of the past century, but Russia still faces enormous sustainable development challenges – challenges that are compounded by economic sanctions that are sending its economy into recession territory.

The country’s infrastructure, building and manufacturing stock all suffer from extreme energy inefficiency: a recent World Bank study found that efficiency improvements in Russia could cut its energy consumption by 45%, an amount equal to France’s total annual energy consumption.

Income inequality is a similarly profound obstacle to progress in Russia, with some reports suggesting that Russia’s wealth gap is the worst in the world. In particular, a report from Credit Suisse found that just 110 Russian citizens hold 35% of the nation’s household wealth.

Then there are Russia’s environmental problems: in the Russian Federation, fossil fuels are king. Not only do oil, gas and coal produce 90% of the country’s energy, they are also responsible for more than half of the federal government’s budget. Aside from hydroelectric and nuclear power, Russia’s non-fossil fuel energy resources are fledgling, almost to the point of nonexistence.

As global warming melts the world’s permafrost over the course of this century, up to two thirds of Russia’s gargantuan landmass may become swampland, further devastating infrastructure and livelihoods. The official Kremlin response to global warming he been less than encouraging: in the past, Vladimir Putin has said that “two or three degrees” of warming could be good for Russia because residents wouldn’t need to spend as much on fur coats.

That philosophy can’t withstand the real-world effects of climate change in the country, perhaps most notably the incredible 2010 drought – which NASA scientist James Hansen and others have statistically linked to climate change in several studies – that decimated Russia’s wheat crop and sent global wheat prices soaring.

But if Russia faces the same panoply of environmental challenges as the rest of the BRIC (Brazil, Russia, India and China) countries – and the rest of the world – those challenges are being dwarfed by the country’s social and political challenges. Lately isolated from the West by economic sanctions in the wake of Russia’s annexation of Crimea, the country’s government has responded by cracking down on foreign participation in domestic affairs.

In 2012, the Russian government adopted a strict new Foreign Agents Law that requires politically active NGOs that receive international funding to register as foreign agents, which is, as Human Rights Watch explains, “a term generally understood in Russia to mean ‘traitor’ or ‘spy’”.

The definition of political activity has been so broadly applied that it includes policy advocacy aimed at addressing social and environmental woes. Several human rights and environmental groups face fines and criminal prosecution after being labeled as foreign agents in July.

In its database, Radio Free Europe ­– which is compiling a comprehensive list of NGOs facing punishment as foreign agents in Russia – notes that, among many other groups, Transparency International Russia received a foreign agents warning in April stating that it “seeks to shape public opinion on state policies, particularly on law enforcement and the legislative process”.

In the past three years, the law has resulted in a crackdown on pro-democracy groups. Citations under the law have led the U.S. Agency for International Development being expelled after 20 years of work in Russia.

The country also has come under fire for its civil rights issues. It faced allegations of corruption around the 2014 Winter Olympics in Sochi. It also became a battleground for gay rights during the games, with widespread boycotts, protests and demonstrations, after the country enacted an anti-gay law and Putin said gay people would not be harassed as long as they “leave children alone”. Those controversies compounded international objections that began after Russian punk band Pussy Riot was jailed for nearly two years for a musical protest at a cathedral in Moscow.

In this political environment, the social and environmental may look bleak – and it’s long odds that anything will change dramatically very soon. But that’s not to say there isn’t any good news coming out of Russia. Despite the foreign agents law, the country is home to a broad network of environmental and social NGOs working locally and regionally, and winning some success.

In the wake of the Chernobyl meltdown in 1986, the country enshrined strong environmental protection principles in its constitution. The challenge, of course, is whether those protections will be enforced – a distant likelihood in a country that consistently ranks in the world’s bottom third on the Transparency International’s Corruption Perception Index, which measures perceptions of corruption in countries and territories by domestic and international observers.

Forestry is another area where Russia is a world-leading power: the forests that cover 45% of Russian land account for 22% of the world’s forests. Although progress is slower on sustainable forestry than fishing, more than 33m hectares of Russian forests have already earned the Forestry Stewardship Council certification for responsible forest management, and environmental nonprofit World Wildlife Fund Russia is partnering with Russian forestry companies and multinationals, including TetraPak and Avon, to spread the adoption of FSC’s sustainable forestry management practices.

Despite its isolation, Russia casts a big shadow across both Europe and Asia, not least because of its position at the center of the former Soviet Union. And while Ukraine stands most fully in Russia’s shadow – not only because of its ongoing geopolitical conflict with Russia, but also from the economic devastation that has resulted from that conflict – Ukraine is not alone in that shadow.

The sanctions levied against Russia by the European Union, the U.S. and others in the wake of the Ukraine crisis have affected countries farther afield as well. After all, Russia retaliated by levying its own sanctions, including a ban on food imports from EU members. This has eliminated about €320m ($358m) in produce sales from Poland to Russia, devastating Polish apple producers.

Even as some European producers have been harmed by Russia’s sanction, some Russian producers have seen it as a great boon, even if sanctions in both directions have made the markets more volatile.

In Russia’s Far East, the nation is entangled with China, Mongolia and other Asian nations, especially in energy and fisheries projects. Ongoing sanctions from the West could end up strengthening ties between Russia and its Asian neighbors: last month, China and Russia announced the formation a $200m joint clean tech incubator.

Although Russia’s transformation into a hub of clean energy innovation seems like a long shot, it also seems equally necessary. As its economy shrinks, a dramatic change of course may be the only move that will prevent Russia from a backward slide out of the realm of global economic powerhouses.

looks like a very weak argument to me, more a case of wishful thinking. Russia is rich in resources, it has sanctions vs the declining EU, but is trading more heavily with China and the rest of the world. Russias military hardware is technologically superior to the west, and it has a developing infrastructure which is being improved, thus resulting in growth. Its economic foundations have a stong enough basis to be gaining momentum after sanctions, the bottom has already been reached on the Ruble. As Eurasian union, and high speed rail to china is built, we will see continued growth in Russia not the decline this article argues. If russias economy was so unstable, they would not have survived the western unilateral sanctions.