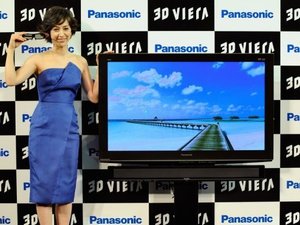 Japan's Panasonic is to sharply scale down its money-losing television business and cut more than 1,000 jobs, Japanese media reported on Thursday.

The leading electronics manufacturer plans to cease production of plasma panels at its No. 3 plant in Amagasaki, Hyogo Prefecture, by March, according to Jiji Press, Kyodo News, the Yomiuri Shimbun and NHK.

The company was also considering selling its LCD display panel plant in Mobara, Chiba Prefecture, possibly to one of its domestic rivals, according to local media, who all cited unnamed sources.

The plan will come with more than 1,000 job cuts through an early retirement program in an aggressive effort to revamp its TV business, which has been losing money for three years, Jiji and Kyodo said.

Panasonic has decided to downgrade its TV sales target for this fiscal year to March from 25 million units to 20 million, Jiji Press said.

A Panasonic spokesman said, however, no decisions had yet been made.

"It is true that our TV segment has seen losses in the past several years. We have been saying we wished to make efforts to turn things around," he told Agence France Presse.

"There are many items under consideration, but we have nothing that we can discuss with you at this point," he said.

Panasonic's No. 3 plant in Amagasaki, completed in December 2009, is among the biggest plasma panel factories in the world.

The company currently produces plasma panels in Amagasaki and at a plant in Shanghai, China.

Panasonic makes LCD panels at the Mobara plant and another factory in Himeji, Hyogo prefecture.