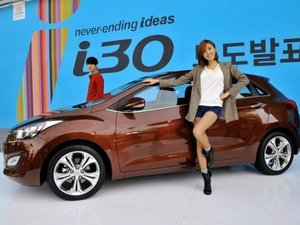 South Korea's Hyundai Motor on Thursday unveiled a revamped and fuel-efficient version of its i30 compact car to better compete with European models such as Volkswagen's Golf.

The revamped i30 will hit Europe in January next year, Australia and the Middle East in March and the United States in May.

With its dynamic design and innovative functions, the new i30 will become a premium hatchback, company president Kim Choong-Hotold reporters, describing its domestic competition as the Golf and Peugeot's 308.

He said about 50 percent of the i30 hatchbacks would be sold in Europe.

The new i30 comes with 1.6-litre gasoline and diesel engines and six-speed automatic transmission. It features improved safety including seven airbags.

Hyundai and its affiliate Kia Motors together form the world's fifth-largest carmaker by sales.

Usually the term premium refers to an upper class of cars from luxury manufacturers e.g. Audi A3, BMW 1 Series, Mercedes-Benz A Class, Volvo C30 in this format.