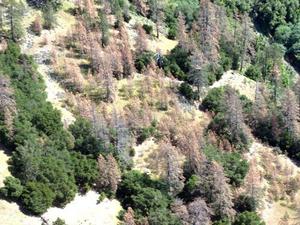 Instead of the typical deep green color, large swaths of pine trees now don hues of death, their dehydrated needles turning brown and burnt-red because of the state’s worsening drought.

“Unlike back East, where you have fall colors, here it’s because the trees are dying,” said John Miller, a spokesman for the San Bernardino National Forest.

Years of extremely dry conditions are taking a heavy toll on forest lands across California and heightening the fire risk as summer approaches.

“The situation is incendiary,” William Patzert, a climatologist for the Jet Propulsion Laboratory, told The Times recently. “The national forest is stressed out.”

A new study by the U.S. Forest Service tried to assess the scope of the problem. Researchers estimated that the drought has killed off at least 12.5 million trees in California’s national forests during the drought.

The scientists expect the die-off to continue. “It is almost certain that millions more trees will die over the course of the upcoming summer as the drought situation continues and becomes ever more long term,” said biologist Jeffrey Moore, acting regional aerial survey program manager for the U.S. Forest Service.

Moore and other researchers conducted an aerial survey of more than 8.2 million acres of forest last month.

“It’s pretty rough,” said Moore, adding that a statewide survey is planned later this year. “It is cause for concern — but there is not too much to do about it.”

The scarcity of water is not the trees’ only enemy amid the drought.

Weakened and dehydrated, many of the trees are being finished off by bark beetles — tiny brown insects that thrive in dry conditions, chewing away at pines and making them brittle.

Officials say they are seeing an uptick in bark beetles amid the drought. In the San Bernardino forest, bark beetle infestations were considered a factor in deadly fires that devoured swaths of mountainside in 2003.

The trees’ natural defense against the beetles lies in their sticky resin, said Timothy Paine, an entomologist at UC Riverside who has studied the beetles and their environment.

The water in properly hydrated trees creates pressure internally that pushes the resin out to the tree’s surface, deflecting beetles that don’t want to get caught in it, Paine said. When a tree is dried up, it can’t produce additional resin that protects it from the beetles, making a perfect opportunity for them to colonize, Paine said.

“If you have a drought, you get large numbers of trees that are susceptible,” Paine said. “The beetles build up their populations.”

The increasingly brittle trees are part of an increasingly dangerous equation — including a dwindling snowpack and warmer temperatures — that is creating extreme fire danger in the state’s forests, according to Patzert.

Traditionally, by spring, the forest is green and lush after the rainy season. But the drought and warm temperatures have taken their toll. Dead trees, parched chaparral and dried-out grass are building up in the forests, creating potential fuel for fires.

The dangerous conditions statewide have forced firefighters to augment their staffing because any small fire can explode into a devastating blaze, according to the California Department of Forestry and Fire Protection.

In Pinnacles National Park, officials have banned fires about six to eight weeks earlier than usual because of the “very dry conditions,” said Jan Lemons, a park spokeswoman. There, the gray pines and chaparral are dying, she said.

Scott Stephens, a fire science professor at UC Berkeley, said fire suppression and harvesting have made forests more dense over the last 100 years. The increased density has made trees more vulnerable as they compete for limited amounts of water, with the weaker trees more susceptible to bark beetle infestations, he said.

“If the drought continues for another two years or longer, I expect this mortality to move throughout the state,” Stephens said. “Forests that once burned frequently with low-moderate intensity fire regimes are the most susceptible.”

Moore, of the Forest Service, said the last time researchers saw so many trees dying was during the great drought of the 1970s. At that time, the National Park Service did not conduct aerial surveys in California, only ground reports, he said.

If the drought continues, the number of tree deaths could surpass that era, he said.

SOURCE: latimes.com - http://www.latimes.com/local/lanow/la-me-ln-trees-dying-california-drought-20150505-story.htmlFollow us on #climatechangelb to engage with us.