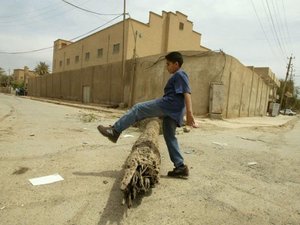 Amer Musa Nasim, one of the last seven remaining Jews in Baghdad, says he finally had to leave violence-stricken Iraq to live a peaceful life even though he loves his country.

"I have always tried to hide my identity to avoid trouble," said Nasim, 38, who arrived in Jordan earlier this year.

"But I am Iraqi and I love Iraq," he said, adding that he could not, however, keep his religion secret because it was marked on his national identity papers.

"My friends and some neighbors in Baghdad knew I was Jewish and they treated me with kindness and respect. After all, I liked them. We are all Iraqi, and Iraqi Jews have never harmed the country," said the merchant, who sold clothes and perfume.

"I had no future. I could not get married because I could not find a bride. The last Jewish wedding in Iraq was held in 1978."

Today, Nasim dreams of a better life in Britain, where his mother and sister live. But his visa application has been rejected four times.

He proudly recalls his great uncle, Mir Basri, author and renowned economist, who was secretary general of the Iraqi foreign ministry back in the 1940s.

There were about 150,000 Iraqi Jews before the 1948 creation of Israel. But between 1948 and 1951, nearly all of the country's 2,500-year-old Jewish community fled amid a region-wide outbreak of nationalist violence.

The issue of Jews in Iraq dates back to 1948 and the organized work of Zionism to relocate them to a different place," said Kamel al-Amin, spokesman for the Iraqi ministry of human rights.

"Iraq is a tolerant country that does not oppose the presence of Jews. There are no official plans or actions against them. Iraq is undergoing difficult circumstances and situation, and that's why only a few of them remained in the country."

In the violence that erupted after the US-led invasion of 2003, Iraq's few remaining Jews went into hiding as sectarian militias marauded across the country, slaughtering Muslim rivals as well as Christians and other minorities.

Last month, a leaked US diplomatic cable released by whistleblower website Wikileaks quoted a woman who spoke with a US embassy staff member in October 2009 as saying "there are now eight remaining members of the Iraqi Jewish community in Baghdad," including herself.

"She stated that the community had numbered 20 persons in 2003, but that the number has declined as a result of old age, emigration, and sectarian violence," according to the cable.

It said the woman, a dentist, was "one of the last remaining Jews in Iraq".

Her mother, she said, had died the previous year, while her husband was kidnapped by Al-Qaeda-affiliated militants in 2005, and was most likely murdered.

She said a synagogue and Jewish cemetery in Baghdad have been shut since 2004. Another synagogue in the southern port city of Basra had been turned into a warehouse.

When asked about Iraqi Jews living abroad returning to visit or re-establish connections, the woman "was pessimistic, saying that latent anti-Semitism within Iraqi society would prevent this from happening anytime soon."

Nasim said that "in 2007, a Jewish jeweler was kidnapped in 2009, and another had to flee Iraq following that."

That departure left only seven Jews in Baghdad until Nasim decided to pack up and leave.

"Despite all the pessimism that surrounds us, I dream of the day when all Jews return to Iraq ... which they loved and remained loyal to," he said.

Prior to the exodus in 1948, Jews made up around a third of Baghdad's population and played a major role in the political, economic, and cultural life of Iraq.

Their troubles began in the early 1930s, with the rise and gradual radicalization of Arab nationalism and the simultaneous arrival of Zionism, with emissaries mobilizing Jewish youth and urging emigration to Palestine.

The process culminated with the birth of Israel, the 1948 Arab-Israeli war and operations Ezra and Nehemiah, which flew Jews out to Israel.

During the early years of Iraq's monarchy early in the last century, there were six Jewish members of parliament in the predominantly Muslim country and a Jewish finance minister.

Israel brought destruction for so many. It should never have been created. I hope they can return to iraq and live in peace in their homeland. Had it not been for zionism then iraqi jews would be 500000 strong in iraq and would have been able to live and marry in their own community in their land. Instead israel was created by euro ashkenazi fake jews and bombed oriental jews in the name of arabs in order to get them to flee to "israel" and be third class citizens.