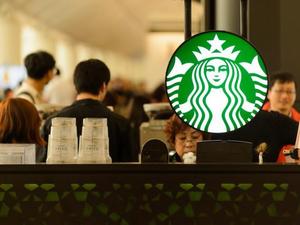 Last month, Starbucks came under fire for its bottled water business. An investigation by Mother Jones magazine found that Ethos — the Starbucks-owned water brand created “to help fix the global water crisis” — was sucking groundwater out of a California county in exceptional drought, and making a lot of money doing it.

Now, ostensibly in response to that criticism, Starbucks has announced that it will stop doing that. In a Friday statement, the company said it would move the sourcing and manufacturing of Ethos water out of California and into Pennsylvania. Moving the entire West Coast operation cross-country would take about six months, it said.

“We are committed to our mission to be a globally responsible company and to support the people of the state of California as they face this unprecedented drought,” John Kelly, Starbucks senior vice president of global responsibility and public policy, said in the statement.

As Mother Jones pointed out in its investigation, the area where Starbucks has been sourcing and bottling its Ethos water for the West Coast has been in severe drought for years. “Placer County, where Ethos’ spring water is drawn, was already declared a natural disaster area by the USDA because of the drought back in 2012,” the article reads. “Merced County, where the bottling facility is located, declared a local emergency due to drought more than a year ago, as ‘extremely dry conditions have persisted since 2012.'” Last month, Placer County declared a water shortage emergency.

Now, Starbucks says it will move its California operations to Pennsylvania, which currently provides the East Coast with its Ethos water. But Pennsylvania also has a drought problem. While nowhere near as bad as California’s, the state Department of Environmental Protection recently issued a drought watch for 27 counties, including the one where Ethos operates.

Ethos is not the only bottled water company operating in a drought-affected area. PepsiCo and Nestle — which own brands like Poland Spring, Deer Park, and Pure Life — derive their water from some of the thirstiest parts of the country, according to a Huffington Post analysis.

The fact that so many companies seem to do this has raised questions about the viability of the bottled water business, particularly in a future where droughts become more severe. According to the National Climate Assessment, droughts are slated to intensify in the Midwest, Great Plains, Southwest, and West Coast if action is not taken to reduce carbon emissions.

The bottled water industry has pushed back on those questions. In response to the Mother Jones investigation, the International Bottled Water Association (IBWA) said it was incorrect to blame California’s drought on the industry, and that comparatively, bottled water companies are good corporate citizens when it comes to the environment.

“Bottled water companies use a very small amount of water when measured against almost any other industry, are dedicated to responsibly protecting and preserving our vital water resources, and help people live healthier lives,” IBWA vice president of communications Chris Hogan said in a statement.

The association also pointed to research showing that 80 percent of California’s water is used by the agriculture industry. Bottled water, on the other hand, makes up less than one percent, according to the U.S. Geological Survey.

As the widespread California drought promises to continue and threatens to worsen, Americans are steadily increasing their consumption of bottled water. And companies are responding to that demand — on Monday, the San Francisco Chronicle reported that the Crystal Geyser Water Co. would open a plant to source bottled water from an aquifer that feeds the Sacramento River, “the primary source of drinking water for millions of thirsty Californians struggling to cope with a four-year drought.”