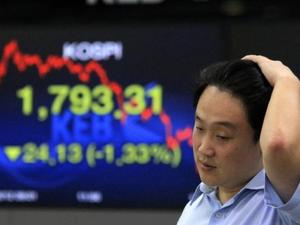 The Labor Department said that first-time applications for unemployment dropped 6,000 to a seasonally adjusted 403,000. The number was in line with Wall Street's estimates, but still above the 375,000 claims a week that economists say signals a healthy jobs market.

Stock futures do not always accurately predict how indexes will trade once the market opens, however.

Stock indexes in Europe were broadly lower. Benchmark indexes in Germany, France and Italy each lost 0.5 percent. Concerns about Europe's debt crisis have driven much of the market's swings lately.

Officials from the 17 countries that share the euro will meet this Sunday to discuss ways to contain the damage should the Greek government default on its bonds, a move that is widely expected. Investors fear that a messy default will lead to huge losses for European banks that hold Greek bonds and cause a credit crisis similar to the one in 2008 after Lehman Brothers collapsed.

Microsoft Corp. will report its earnings after the market closes.

Stock indexes turned lower in late afternoon trading Wednesday on reports of an impasse in talks to resolve Europe's debt crisis. The Dow closed at 11,504.62, a loss of 72.43 points, or 0.6 percent. On Tuesday the Dow closed half a point below where it started the year.