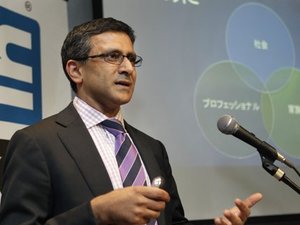 LinkedIn Corp. on Thursday launched its online professional networking service in Japanese, the first Asian language platform for the rapidly growing company as it pushes to expand in the region.

Mountain View, California-based LinkedIn also established a small Tokyo office, following the opening of its Asia-Pacific headquarters in Singapore in May.

Arvind Rajan, head of LinkedIn's Asia operations, described Japan as a key market for the company because of its technologically sophisticated work force. LinkedIn hopes that the lessons learned in Japan will ultimately translate into new offerings for the rest of the world.

LinkedIn has about 120 million members worldwide, with 20 million in Asia and the South Pacific. It began moving into Asia in late 2009, concentrating first on English-dominant markets like India and Australia.

"As we think about the region as a whole, we see tremendous opportunities for growth," Rajan told The Associated Press in Tokyo. "Our penetration levels in Asia, except for those English-speaking countries, are still relatively low."

Rajan said the company is not focused on revenue in Japan at this point. Rather, it aims to grow its membership and will tweak the service to fit local needs.

"We know that if we build a successful membership in Japan, we'll have companies, we'll have advertisers using LinkedIn," he said.

But in Japan, it faces a work force that is more accustomed to anonymity on the Web than the sort of openness encouraged by LinkedIn and other U.S. social networks. The concept of personal branding or building a professional online identity is also still relatively foreign. Most Japanese workers tend to stay at one company for a long time, and job switches are much less common than in the West.

Along with translating the platform, LinkedIn built special tutorial pages to teach Japanese members how to use the site. It also introduces core LinkedIn concepts that may be unfamiliar in Japan such as connecting and the value of a professional network.

"There's a lot more education that we're going to need to do," Rajan said. "That's on us to really figure out how to do that."

LinkedIn is now available in 10 languages. More are in the works, though Rajan declined to say which languages might be next. Earlier this year, it launched in Russian, Romanian and Turkish.

And what about China, the world's most populous country? A launch there doesn't appear to be imminent.

"China is more complicated," Rajan said, citing many local competitors and the rapid pace of change.

"Our approach has always been, we're not just going to dive in and add a language without thinking through what's a winning strategy," he said.

LinkedIn has had a decent year, having executed the biggest initial public offering by a U.S. Internet company since Google went public in 2004.

The company reported better-than-expected quarterly profits in August as growth in membership and revenue picked up pace, though its share price has floundered.