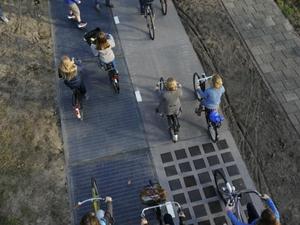 In its first six months of existence, the world’s first solar road is performing even better than developers thought.

The road, which opened in the Netherlands in November of last year, has produced more than 3,000 kilowatt-hours of energy — enough to power a single household for one year, according to Al-Jazeera America.

“If we translate this to an annual yield, we expect more than the 70kwh per square meter per year,” Sten de Wit, a spokesman for the project — dubbed SolaRoad — told Al Jazeera America. “We predicted [this] as an upper limit in the laboratory stage. We can therefore conclude that it was a successful first half year.”

De Wit said in a statement that he didn’t “expect a yield as high as this so quickly.”

The 230-foot stretch of road, which is embedded with solar cells that are protected by two layers of safety glass, is built for bike traffic, a use that reflects the road’s environmentally-friendly message and the cycling-heavy culture of the Netherlands. However, the road could withstand heavier traffic if needed, according to one of the project’s developers.

So far, about 150,000 cyclists have ridden over the road. Arian de Bondt, director of Ooms Civiel, one of the companies working on the project, said that the developers were working on developing solar panels that could withstand large buses and vehicles.

The SolaRoad, which connects the Amsterdam suburbs of Krommenie and Wormerveer, has been seen as a test by its creators — a stretch of bike lane that, if successful, could be used as a model for more roads and bike lanes. The researchers plan to conduct tests of the road over the next approximately two and a half years, to determine how much energy the road produces and how it stands up to bikers. By 2016, the road could be extended to 328 feet.

Though the Netherlands’ solar road seems to be going as planned, solar roads overall typically aren’t as effective at producing energy as solar arrays on a house or in a field. That’s because the panels in solar roads can’t be tilted to face the sun, so they don’t get as much direct sunlight as panels that are able to be tilted. However, solar roads don’t take up vast tracts of land, like some major solar arrays do, and they can be installed in heavily-populated areas.

One couple is set on making solar roads a reality in the U.S. Scott and Julie Brusaw created an Indiegogo campaign last year to help fund their Solar Roadways project, and the campaign raised more than $2.2 million. The U.S. might have to wait a while to see solar roads installed, however. As Vox pointed out last year, cost could be a major barrier for solar road construction in the U.S. And according to a Greentech Media article from last year, one of the biggest things that officials still aren’t sure about with the roads is safety. They want to be sure the roads can stand up to heavy traffic, and that the glass protecting the solar panels won’t break.

“We can’t say that it would be safe for roadway vehicular traffic,” Eric Weaver, a research engineer at the Federal Highway Administration’s research and technology department, told Greentech Media. “Further field-traffic evaluation is needed to determine safety and durability performance.”