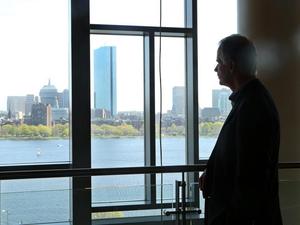 Thomas Malone does not believe there is a solution to the problem of climate change. He thinks there are lots of solutions — and he has set out to find them.

Malone is founder and head of the Massachusetts Institute of Technology’s Climate CoLab, an online community that is attempting to use crowdsourcing to tackle one of the thorniest and most complex problems facing the planet.

“It is a problem in which we all have some sort of stake,” Malone said. “It is not a problem where one person or one organization can solve the problem alone.”

Though crowdsourcing has been around for centuries, the approach has become more prominent as the Internet makes it easy and inexpensive to tap the wisdom of the masses. It is the foundational principle behind Wikipedia and has been adopted by major corporations and the federal government as a strategy for innovation.

Climate CoLab’s crowdsourcing project approaches its daunting challenge by first breaking the issue of climate change into dozens of smaller questions: How can we reduce greenhouse gas emissions from energy generation? How can we shift public attitudes toward climate change? How can we increase urban energy efficiency?

Each question forms the backbone of a contest in which experts, amateurs, and even artists are invited to propose potential solutions. Currently, 17 contests are active on the project’s website. Another seven are set to open soon.

“What’s nice about how the Climate CoLab is set up is it lets you gauge interest from other parties: What do they like? What message is getting across when you share this idea?” said Tim McGee, part of a team that proposed ways to alleviate the heat-island effect in Cambridge in a contest earlier this year. McGee’s team suggested addressing the problem — the tendency of cities to have higher temperatures — by using canopies draped between buildings and walls covered in plants to imitate the natural cooling cycles of a forest.

This year, the CoLab is adding a new layer of contests intended to generate more comprehensive plans for dealing with climate change. These competitions will ask entrants to combine existing ideas, from other contests or from outside sources, to create an integrated strategy for a geographical region.

For instance, a competitor in the India Plan contest might create a plan combining transportation, agriculture, and urban energy projects from other contests. “The idea is to get lots of people engaged in thinking about how can all the parts fit together,” Malone said.

Each contest produces a popular winner, chosen by online voting, and a judges’ winner, selected by a panel of experts. Judges also award a grand prize of $10,000 to one of the individual contest winners each year.

Once winners are chosen, the CoLab makes a point of helping participants connect not only with each other but with other people and organizations who can help bring proposals to fruition. At the end of each contest year, the CoLab hosts a conference at MIT to highlight the winning ideas and present new developments in the fight against climate change.

Last year’s big winner was Danielle Dahan, whose work as an energy efficiency engineer inspired a proposal to train maintenance workers to better use the sophisticated energy efficiency systems installed in most new buildings today.

Dahan plans to spend this summer figuring out how best to get her plan off the ground, before starting a master’s program in technology and policy at MIT in the fall.

“You don’t usually get to think big about energy and think outside the box you work in,” Dahan said. “Just the title ‘grand prize winner’ has been helpful to get attention from people and support.”

The first round of competition was held in 2009, but nearly two-thirds of the 1,000 proposals submitted came last year, Malone said. The number of people registered to view and vote on submissions has tripled over the past year to 34,000, including participants from almost every country in the world.

The obvious advantage of crowdsourcing is it creates a large pool of ideas. And more ideas mean more chances of finding a great proposal, said Karim Lahkani, principal investigator at the Crowd Innovation Lab at Harvard University. The approach can also encourage a greater diversity of ideas, he added, because anyone can participate; no managers pick the “best person” to work on a project.

One CoLab contest is focused on finding strategies to help Somerville reach its goal of becoming carbon-neutral by 2050. Reaching out to the crowd is a promising approach to such an ambitious goal, said Emily Reichert, one of the contest judges and chief executive of Greentown Labs, a clean tech incubator in Somerville.

“What the platform allows you to do,” she said, “is to access a community that is already engaged in addressing climate-related issues on a global scale, rather than going in a room and hiring a consultant and making it a closed-door process.”