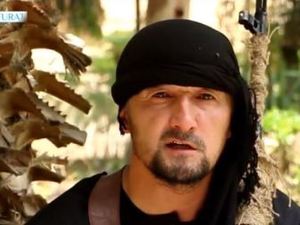 Tajikistan on Tuesday replaced its former special forces head who claims he skipped the country to fight for the Islamic State group and is now on Interpol's wanted list.

The Central Asian country is reeling from the shock defection of 40-year-old Colonel Gulmorod Halimov, which was revealed in an apparent IS propaganda video last week.

Halimov, who claimed the secular republic's anti-Islamic policies were behind his defection, was replaced by career policeman Hurshed Makhmadshoev as the head of the interior ministry's OMON special forces unit.

On Saturday, Halimov's older brother, who works for the state penitentiary service, wrote an open letter begging him to return and face punishment.

"He had a good family, a house, a car, respect and honor. I do not understand how he could have fallen into IS," his brother  Saidmurod Halimov wrote.

Police in Tajikistan are investigating Halimov, who disappeared in late April, for mercenary activities.

An official in Tajikistan's security services confirmed to AFP on condition of anonymity that two of the men he recruited were interior ministry staff.

In a 12-minute clip featuring the logo of the Furat media collective believed to be controlled by the Islamic State he called Tajikistan's leadership "dogs" and Americans "pigs."

"We are coming for you, Inshallah!" he told the Tajik government, which he harangued for cracking down on hijab-wearing and other public manifestations of Islam.

The Supreme Court in the authoritarian former Soviet state only designated IS as a terrorist group last month. The interior ministry claims that more than 300 citizens are fighting in its ranks in Iraq and Syria.

Halimov completed five counter-terrorism training courses in the United States, a State Department official confirmed Saturday. He is thought to have taken around 10 other citizens with him, most probably to Syria.