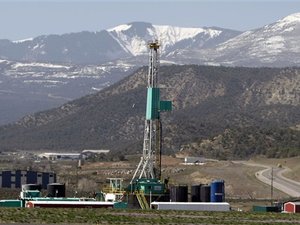 Lately you could get the impression that coal is the only one.

As a global agreement to rein in climate-warming carbon emissions draws closer, oil and gas companies are increasingly talking about coal as the problem and describing themselves as a crucial part of the solution, together with renewable energy sources like wind and solar power.

"We stand ready to play our part," six major European oil and gas companies including Royal Dutch Shell and BP said in a recent letter to U.N. climate officials working on a major climate deal set to be adopted in Paris in December.

As they see it, their part includes gobbling up coal's market share in power generation. Natural gas plants — many oil companies also produce gas — release about half the CO2 emissions of coal-fired plants and lower levels of air pollution.

He called natural gas a "clean-burning ally to renewables such as solar and wind."

BP Chief Executive Bob Dudley had a similar message, saying "we need to explain more clearly that gas is not so much part of the problem as part of the solution," according to a speech posted on BP's website.

The coal industry has resisted counter-strikes against its fellow fossil fuels, opting instead to highlight new technologies that improve the efficiency of coal-fired power plants or capture their CO2 emissions.

Without such coal technologies, goals to reduce carbon emissions "to a satisfactory level will not be achieved," the World Coal Association said in a statement e-mailed to The Associated Press.

"Growing energy demand means that coal is a central part of the energy mix, with demand forecast to increase," the group said.

About 40 percent of the world's electricity comes from coal-fired power plants. Many are in energy-hungry economies like China and India where coal is an affordable and reliable option.

The split in the fossil fuel family represents a shift from the last time the world negotiated an international climate agreement, the 1997 Kyoto Protocol. Back then, big oil and coal companies had more of a united front against international limits on emissions, said Jake Schmidt, a climate policy expert at the Natural Resources Defense Council.

Now the oil and gas executives are trying to be part of the conversation, while "some of the coal industry is still saying 'no'," Schmidt said.

However, many environmental advocacy groups are suspicious of the motives behind the oil-and-gas industry's attacks on coal and don't want any of them to influence climate policy.

They note that instead of heeding calls to let fossil fuels remain in the ground, oil and gas companies are pushing into new areas of exploration like the remote and ecologically sensitive Arctic.

Shell is gearing up for a controversial drilling campaign off Alaska this summer, while Norway's Statoil is expanding northward in the Barents Sea. Russia's Gazprom already is producing oil in the Arctic from an offshore platform in the Pechora Sea.

"You are seeing them demonizing the coal industry in order to benefit from it," said Jesse Bragg of Corporate Accountability International. "But the solution is not a different type of fossil fuel; it's transitioning away from fossil fuels."