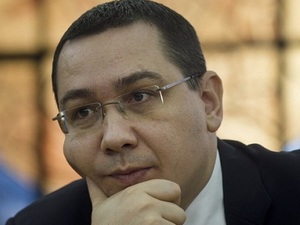 Romania's Prime Minister Victor Ponta refused to step down after being hit on Friday by corruption allegations, the highest sitting leader targeted in a long-running anti-graft campaign in one of the EU's poorest nations.

The president said the allegations of money laundering, tax evasion and conflict of interest put the country in "an impossible situation."

"The worst that could happen would be to have a political crisis" in the struggling EU country, said Iohannis, calling for Ponta to step down.

But Ponta, who lost to Iohannis in a bid for the presidency in November, looked set to fight to hold onto the premiership.

"Only parliament can unseat me," he said on Facebook. "I respect the president's public position but I was named to this position by parliament," where the leftwing coalition led by his social democrat party has a large majority.

"The respect of constitutional principles is essential to our society and in no case could I accept that a prosecutor be above parliament, the government and citizens," Ponta added.

If that were the case it would be "dictatorship", he added, a strong slur in a country that ousted its communist regime 25 years ago.

A former lawyer, 42-year-old Ponta enjoyed a rapid rise to power. Fluent in English and French, he counts Tony Blair among his role models and is viewed abroad as leading a new generation of Romanian politicians who are more open to dialogue and criticism than their predecessors.

Parliament would have to strip the premier of his immunity for the probe to proceed.

The DNA said in a statement that prosecutors were filing a formal request for an investigation with parliament.

Romanian party leaders said they were passing the request to the Judicial Commission, which has 14 days to issue a recommendation. Parliament will then decide how to proceed based on its recommendation.

The DNA, whose anti-corruption drive is regularly praised by the European Commission, said the premier was suspected of "forging documents... (and) continuous complicity in tax evasion" and money laundering while working as lawyer and then a lawmaker between 2007 and 2011.

Ponta is accused of receiving the equivalent of around 55,000 euros (about $61,000) when he was a lawyer from his political ally Dan Sova, a member of parliament suspected by the DNA of abuse of power in three cases but who has maintained his parliamentary immunity.

Sova notably bought a racing car that was used by the prime minister -- who is a huge fan of rallying -- paying in several installments.

If parliament rejects the DNA's request to investigate Ponta -- which seems likely given the center-left’s large majority -- "we will continue proceedings solely regarding Mr. Ponta's time as a lawyer," DNA spokeswoman Livia Saplacan told AFP.

The probe is the latest in a string of anti-corruption inquiries carried out by the powerful agency, probes that have led to several influential Romanians losing their jobs over the past months.

Former finance minister Darius Valcov was taken in for police questioning in March after lawmakers revoked his ministerial immunity.

Days later the investigators seized dozens of paintings, including three by Pablo Picasso, as part of the probe.

Romania is the second poorest nation in the European Union after Bulgaria.