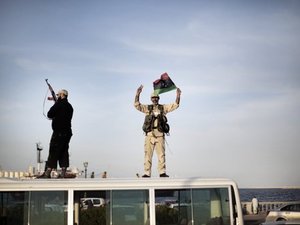 The death of Libyan dictator Moammar Gadhafi eases the specter of a fully fledged insurgency that could disrupt oil production for years to come, energy analysts said Thursday.

Experts said news of Gadhafi's death would have little immediate impact on the price of oil, but removed a threat that had been hanging over future prices.

"It actually means little for today's oil price, but it does remove one of a series of risk factors to a sustained ramp-up in Libyan production," said JPMorgan analyst Lawrence Eagles.

With one eye on the chaos that plagued post-war Iraq, many in the market had feared that the collapse of Gadhafi's iron rule would result in a long-running conflict that froze Libyan oil production.

"The economic damage from multiple chronic security issues in major producers has dogged the oil market in the past," Eagles explained.

"Production in Iraq in the aftermath of the second war, in Nigeria and in Colombia, among others, have all been disrupted by rebel activity, so the removal of a protagonist provides a significant boost to security."

Before the revolution began in February this year Libya produced around 1.4-1.6 million barrels of highly prized light, sweet crude a day.

Around 85 percent of Libyan output was exported to Europe, and its disappearance contributed to the price surge in Brent crude from the North Sea, in comparison to New York-traded WTI.

While many upstream facilities have been in the hands of the National Transitional Council for months, the country's oil fields are spread throughout the vast and largely uncontrolled Sahara desert.

"With Gadhafi gone, the loyalists may become demoralized and abandon their cause," said analysts at Barclays.

"This, in turn, could make it easier for the international oil companies to return to areas that had been viewed as particularly volatile because of the presence of pro-Gadhafi forces."

But there was a word of warning from the London-based bank.

"We believe that serious security challenges persist in Libya that could hinder efforts to restore Libyan production fully.

"Divisions within the rebel ranks are undermining efforts to craft a coherent interim government. Fault lines have become increasing apparent between acting Prime Minister Mahmud Jibril and the Islamists within the rebel coalition."

War damage and technical challenges -- including pressure-dependent wells being turned off for eight months -- have also led experts to warn that production will not come back quickly.

"We maintain our view that while Libya can bring on 0.5-0.6 mb/d (million barrels per day) of production by the end of this year and potentially a little more by Q1, the road to the return to pre-war levels remains a treacherous one."

As expected the markets gave a muted first response to the news.

In London, Brent North Sea crude for December pushed $1.38 higher to finish at $109.76 on the Intercontinental Exchange.