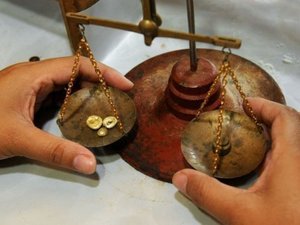 As grime-covered men emerge from deep shafts on the Philippines' "golden mountain", Norie Palma eagerly prepares to haggle for her share of ore from the weary miners.

The former laundrywoman turned gold buyer directs the procession to her small milling shack amid grunts from the miners whose backs are stooped under the weight of their hauls from the dangerous honeycomb tunnels of Mount Diwata.

"It is like this everyday. People are always digging, searching and haggling for that stone with the best gold," says Palma, a 36-year-old mother of four who runs one of many backyard mining operations on Mount Diwata.

"Gold is what we live for on this mountain."

With global gold prices rising as investors park their funds in the precious metal to hedge against an uncertain global economy, Palma said she and other prospectors on Mount Diwata were enjoying a windfall.

Gold hit a record high of $1,921.15 an ounce in early September and, although it has since fallen back, some analysts have forecast it will hit the $2,000 mark this year.

A college dropout, Palma's operation has lately been producing thousands of dollars? worth of gold -- a fortune in the impoverished Philippines.

"You could say gold changed our life. I now have the money to buy the things that I want," she said. "And we want more of it while the prices are high."

Palma buys the ore dug up by the miners who don't have the means to process it, then trades with jewelers and brokers who regularly make the arduous trip up the 2,012 meter (6,600 feet) mountain to buy the yellow nuggets.

The Philippines has some of the biggest gold and other mineral deposits in the world, according to the U.S. government, but the country's official mining industry is relatively small and hard to access for foreign firms.

Illegal mining, in which individuals or small-scale ventures simply start digging on vacant land, is rampant.

Mount Diwata -- located in the violence-plagued and often lawless southern region of Mindanao -- is the country's biggest and most famous of these "gold rush" sites.

It has yielded at least 2.7 million ounces of high grade ore since a tribesman first discovered gold there three decades ago, according to local government data.

The discovery of gold on the mountain triggered a mad rush of people from all walks of life, from military deserters and ex-communist rebels to gun runners and ordinary folk dreaming of that life-changing haul.

The government estimates that at the height of the gold fever in the early 1980s, the population in the area peaked at nearly 100,000.

The present population is believed to be 40,000, according to officials, but they said more miners had started returning to the area recently to take advantage of the rising prices.

However, Mount Diwata is as famous for the misery it has wrought upon the miners and the destruction of the local environment as it is for the riches enjoyed by the lucky ones.

The first generation miners and their families settled in small cliff-side shacks and dug tunnels under their homes, creating the blueprint for a chaotic and dangerous existence in which many laws of society and nature were ignored.

Highly toxic mercury is used in the mining process, polluting the Naboc stream that cuts through the village.

Armed disputes erupted between rival miners and their thugs, according to local village chief Rodolfo Boyles, himself an ex-miner, although he said violence dropped after the military stationed some troops there nine years ago.

He said hundreds of people had also perished in cave-ins and other mine-related accidents.

The hardships of working the mines have earned Diwata the tag "diwalwal", local slang referring to tongues that hang out after a hard day's labor in the tunnels.

"When you enter the mines your life is already at stake, you might be buried there or you might get hit by falling rock," said Dandy Labrador, 28, who left his work as a security guard to become a miner.

"It is dangerous and anything can happen."

Labrador said he arrived at Mount Diwata several years ago filled with dreams of striking it rich, but found that fortune-hunting was back-breaking work.

Like the vast bulk of the miners, Labrador works as a hired hand and is paid with a share of the ore that he digs up. He then sell his ore to brokers.

Still, Labrador said he earned more than he would as a construction worker or laborer in Manila, the country's capital.

"And I have not given up on my dream of becoming rich," he said.

Boyles said there had long been a plan to bring in big mining firms with modern extraction methods and make the operations there legal, but small miners had resisted the idea and continued to virtually control Mount Diwata.

With the high global gold prices, the government is concerned that there will be more Mount Diwata-style operations around the country.

"There is the possibility of a gold rush, because gold is the safest commodity right now," he said. "But we have to manage our resources well... this is not the kind of mining we want to encourage."