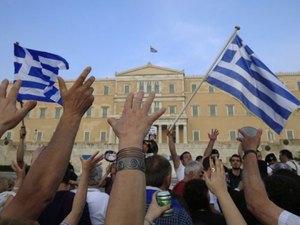 Austerity measures in Greece which have sparked violent protests are nevertheless the "best" way for the country to recover from its desperate debt crisis, Europe's central bank chief said Friday.

"The measures that are taken are the best way to put progressively the people of Greece in a better situation, both in terms of growth and in terms of jobs," Jean-Claude Trichet, the outgoing European Central Bank (ECB) president, said in Warsaw on Friday.

The Greek government's latest austerity measures sparked violent protests in the capital Athens on Thursday, in which one man died, in a fresh show of public anger over the controversial public spending cuts demanded by the debt-ravaged nation's creditors.

"That's obvious, that adjustment is necessary and this is an adjustment which is an ongoing one and is the best way to get to sustainable growth and sustainable governance," Trichet, set to retire at the end of this month, told a meeting focused on the Eurozone and prospective central and southern European members.

"The euro as a currency is a great success indeed," Trichet said, highlighting the achievement of price stability within the 17-member Eurozone.

"Europe’s weakness is governance, and it’s a work in progress," the ECB chief said.

His comments came as European finance ministers were expected to sign off on billions in loans for Greece on Friday amid mounting international pressure on the Eurozone to stave off a global recession.

EU finance, foreign and prime ministers are also to gather over the next days to agree ways of ramping up rescue funding to cover not only Greece, but Italy, the Eurozone's third-biggest economy.

Trichet, who turns 69 in December, is to hand over the ECB's top job to Italy's Mario Draghi on October 31.