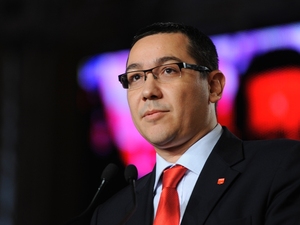 A Romanian parliamentary committee on Monday ruled against a request from anti-graft prosecutors to proceed with a corruption case against Prime Minister Victor Ponta.

Parliament still has to make the final decision on whether to strip Ponta of his immunity at a vote Tuesday, said judicial committee president Ciprian Nica.

But as the legislature is dominated by Ponta's center-left coalition, the lawmakers are expected to follow the committee's lead.

The DNA anti-corruption prosecutors announced Friday that they had launched a probe into the social democrat premier over suspected money laundering and tax evasion.

Investigators are targeting his activities from 2007-2011 when he was working as a lawyer and a lawmaker.

The anti-corruption prosecutors also suspect Ponta of conflict of interest while serving as prime minister. They have asked parliament for the green light to prosecute him.

Ponta has refused to step down over the allegations and said the case has been orchestrated by the opposition.

"The goal of these accusations is to prompt a change of government," Ponta said Sunday, adding that a criminal case against him would bypass parliament, making it "equivalent to a coup d'etat."

As long as Ponta is not being prosecuted for alleged wrongdoing committed while in office, he cannot be suspended from his duties as prime minister.

Ponta is accused of receiving the equivalent of around 55,000 euros (about $61,000) when he was a lawyer from his political ally Dan Sova, a member of parliament suspected by prosecutors of abuse of power in three cases but who has maintained his parliamentary immunity.

This probe is the latest in a string of anti-corruption inquiries carried out by the powerful DNA, probes that have led to several influential Romanians losing their jobs over the past months.