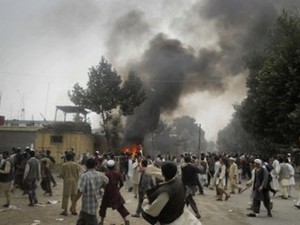 Mauludeen lifts the shirt of his writhing, shrieking infant daughter to reveal a gunshot wound, highlighting the plight of tens of thousands of Afghans caught in the crossfire on the Taliban's expanding northern battlefront.

Civilians are bearing the brunt of a large-scale insurgent offensive in Kunduz province, the keystone of the Taliban's summer fighting season which is expected to be the bloodiest in a decade.

Kunduz is facing a humanitarian crisis, with thousands of families trapped in a vortex of violence as militancy spreads across the north, beyond traditional Taliban hotbeds in the south and east.

Civilians such as Mauludeen have flooded into the provincial capital Kunduz city to escape the conflict, taking shelter in fetid tent settlements, rife with signs of malnutrition and seething with desperation.

Mauludeen, who goes by one name, fled his home in the worst-affected Chardarah district with his wife and six children, including the year-old baby who was hit by a stray bullet during a battle between the Taliban and government-backed forces.

"We left our home, our cattle, our crops just before the harvest season," the 46-year-old vegetable farmer told Agence France Presse, pulling up the baby girl's sequined top to reveal a sutured wound across her abdomen.

"We are homeless, hungry, thirsty and waiting for help."

Some around Mauludeen displayed wounds infested with maggots, others clutched scraps of paper scrawled with messages in Dari pleading for official aid.

Abdul Qadir, a 45-year-old farmer from the same district, drew a line with a stick on the parched earth.

"The Taliban were on this side, government militia on the other -- and we were stuck in the middle," said Qadir, a baggy shalwar kameez flowing over his withered frame.

That typifies what many in Afghanistan feel, seemingly trapped in a hopeless quagmire after 13 years of war, with civilians increasingly caught between the government and a resilient Taliban insurgency.

"The consequences of the conflict go far beyond the horrific loss of life and injury to civilians," Georgette Gagnon of the United Nations Assistance Mission in Afghanistan said in a recent statement.

The Taliban launched their summer offensive in late April with a brazen assault on Kunduz city, coming close to overrunning the provincial capital and sending civilian casualties soaring in outlying districts.

Medical charity Medecins Sans Frontieres (MSF) has received around 225 wounded patients at its trauma centre in Kunduz city since the start of the offensive, more than double the figure in the same period last year.

Many of them with gunshot wounds or blast injuries were forced to make tortuous journeys from remote districts, taking lengthy detours to navigate checkpoints and landmines -- which have been swept loose by recent flooding.

The wards of the MSF centre, exuding the cloying scent of antiseptic, are rife with harrowing tales: a young man hit by stray bullets while herding cattle; a 14-year-old who picked up an unexploded device that went off in his hand; a three-year-old who survived when a rocket-propelled grenade hit his house and killed his father.

On some days five war-wounded trickle in, other days as many as 35, MSF said.

Many are unable to make it at all, trapped in their districts by the fighting.

The World Food Programme estimates that more than 3,700 families displaced in Kunduz by the Taliban offensive are "vulnerable" and in urgent need of assistance.

Outside the WFP distribution centre in Kunduz city, women in lavender burqas cower against the boundary wall, waiting hours in the broiling sun for a ration of flour, cooking oil, pulses and high-energy biscuits.

More than 18,000 families in Kunduz have submitted petitions for aid but so far only half of the applications have been assessed due in part to "access constraints" in war-affected districts, according to the United Nations.

Afghan forces, stretched on multiple fronts, have struggled to rein in the Taliban, whose ranks are bolstered by Central Asian fighters, as they face their first fighting season without full NATO support.

Local observers are critical of a lack of coordination between the forces, a patchwork of soldiers, pro-government militias, and villagers armed to act as police -- all riven with internecine rivalries and accused of further sowing chaos.

Many blame the disarray on the protracted delay in the crucial appointment of a defence minister, apparently due to disagreements between President Ashraf Ghani and his chief executive and former election rival, Abdullah Abdullah.

Frequently they are also scathing of Ghani's brusque governance style -- he sacked the Kunduz governor after coming to power last September over a patchy Skype call with provincial dignitaries.

He vowed back then to overhaul local governance, disarm local militias and improve security in the volatile province, which borders Tajikistan.

"Does no one in the government care that people are losing their lives every day?"