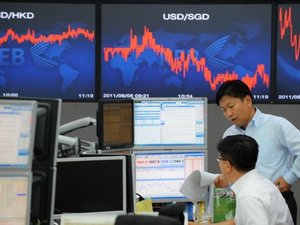 Asian markets were mixed in nervous trade Friday as European leaders put back a final plan to contain the Eurozone sovereign debt crisis.

A rift between France and Germany over how to boost the continent's rescue fund made it unlikely a summit on Sunday would end in a solid deal, leading the 17-nation bloc to announce a second meeting would be held Wednesday.

"We have made enormous progress but not enough to take final decisions," said Steffen Seibert, a spokesman for German Chancellor Angela Merkel.

"We will have talks on Sunday and we will take decisions on Wednesday."

The uncertainty left many dealers on the sidelines.

In afternoon trading, Hong Kong was 0.10 percent higher while Shanghai was down 0.57 percent.

Europe's two biggest economies have been unable to reach agreement on reinforcing the European Financial Stability Facility (EFSF) despite their leaders announcing last week that they had a plan in place,

Investors have been hammered in recent weeks as Paris and Berlin bicker over how to beef up the fund to save weak economies such as Greece, Italy and Spain and avoid another global financial crisis.

France has been pushing for the fund to morph into a bank that could borrow from the European Central Bank to help troubled economies but Berlin opposes that on the grounds it would entail changing the EU's founding treaty.

"Doubts still remain on whether something solid will come out of the meeting," said Hideyuki Ishiguro, supervisor of investment strategy at Okasan Securities. "The wait-and-see mood will likely continue until Wednesday."

One of the top agenda items for the weekend's meeting will be deciding whether to approve a fresh multibillion-euro loan for cash-strapped Athens.

Hopes that loan would be agreed were boosted by news the Greek parliament had approved late Thursday a controversial batch of tough austerity measures demanded by its creditors.

Walking in the presence of giants here. Cool thinking all aruond!