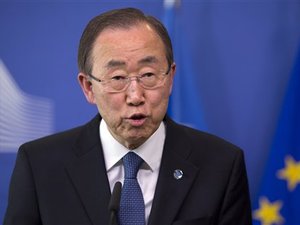 United Nations General Secretary Ban Ki-moon on Saturday warned of a worsening rights situation across Central Asia, as he ended a visit to energy-rich Central Asia in ex-Soviet Turkmenistan.

Ban said he "heard concerns about the deterioration of some aspects of human rights -– a shrinking of democratic space", during his first trip to the region in five years.

Speaking to students at an international university in the capital Ashgabat as he received an honorary degree, he said crackdowns on rights could be triggered by "perceived security threats – in particular, rising concerns about terrorism and violent extremism".

Ban warned however that governments may use such threats "as a pretext to clamp down on civil society, minorities and human rights defenders."

He said that the failure to respect human rights, promote participation in politics and create equal opportunities "creates gaps... The wider the gaps, the greater the openings for violent extremists."

"I see this phenomenon on the rise in the region and it troubles me greatly," he said, adding that "democracy in Central Asia can work."

On Friday, Ban had been in Uzbekistan, where he urged President Islam Karimov to end the practice of forced labour on its cotton plantations and the mistreatment of prisoners in his country.

He also urged Ashkhabad to "move towards media pluralism, freedom of expression and access to information, including through social media."

"In every corner of the world, a robust civil society is crucial for national development. I urge the Government to strengthen its partnership with the nascent civil society in Turkmenistan," he said.

Meanwhile Berdymukhamedov said he discussed with Ban the ongoing conflict in neighboring Afghanistan, as well as the need to create conditions for "reliable and stable transit of energy resources to world markets".