Greek Crisis: What Would The Ancients Say? 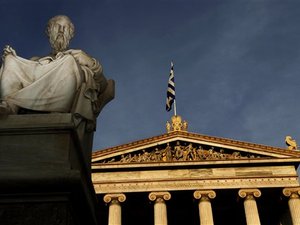 More than 200 international philosophers braved strikes and protests to come to Greece this month to join a forum and debate matters of the mind.

Topics on the program included "The Limits of Abstraction: Finding Space for Novel Explanation" and "Partial Realism, Anti-realism and Deflationary Realism: Can History Settle the Argument?"

For the organizers, the event was a success, a sign that life goes on despite economic hardship and perceptions abroad that Greece is one step from anarchy.

It was also a victory for thinking at a time when the country's debates are dominated by hoarse-voiced slogans. After all, Greece's illustrious ancient thinkers built the foundations of Western scholarship, and their philosophy stands as an unquantifiable source of national wealth even during a financial crisis.

"Sometimes people think that the philosopher is up on Mount Olympus, thinking about abstract things," said Stathis Psillos, a philosophy professor at the University of Athens. "We philosophers have somehow to stand up and say, 'Look, OK, money and profit and the bailout are important. But there are people also.'"

Greece's 11 million people face a barrage of existential questions — about change, values, individual and national identities, the future they want.

What answers would the icons of ancient philosophy be able to give? Are their precepts, crafted more than 2,000 years ago — when Greece was a "superpower," not Europe's weak link — still relevant today?

In the broadest sense, yes. Plato, Socrates, Aristotle and a legion of others explored virtue and reason, ethics and evidence, science and harmony. They also pondered financial theory — the drachma was in circulation then.

In practical terms, the intellectual superstars would scratch their heads. They lived before capitalism, bailout funds, balance sheets and mass consumerism.

They would discover a society radically changed by education, industry and technology. And they might be surprised by the rage, not deliberation, that has gripped Athens, which has been rocked by protests and riots this week against wage cuts and austerity measures.

Psillos, who hosted the three-day forum of the European Philosophy of Science Association, said the "social contract," an idea with Greek roots that groups individuals in a political union, was in "violent rupture" because the state safety net was being scaled down dramatically. The government says the cuts and tax hikes are vital to get international rescue loans that are warding off a wider European or even global crisis.

Psillos lamented budget cuts in higher education. In an interview with The Associated Press, he said the jobs of hundreds of recently picked university lecturers were in limbo, and that some departments were scrounging for cash to make photocopies and buy toilet paper.

Several philosophers say Aristotle's theories are among the most relevant to the financial chaos that has stripped many Greeks of jobs and state benefits once taken for granted. A Plato student, he distinguished finance between household management and commerce based on money as an exchange unit.

The former, Aristotle said, was natural because it entailed the acquisition of things to become self-sufficient, based on practical need alone. The latter, he said, led people to pursue wealth as an end, without limits.

That message, that wealth should service human needs and not fuel greed, will ring true to Greeks angry with politicians for having overspent more than they should in the past, setting the country up for its current crisis. It might even be seen as anti-capitalist — Aristotle's ideas are said to have influenced Karl Marx.

Xenophon, a soldier and historian, was also a student of finance. He wrote about the revenues of Athens, noting that the more visitors and residents, the greater the imports and exports. He also studied investments and public expenses, the development of silver mines, and the role of slavery in commerce.

Rick Lewis, founder of Philosophy Now magazine, said Plato's notion of an ideal state differed from a modern democracy. But in a parallel with modern times, he noted that Diogenes the Cynic lived in a barrel and advocated self-reliance to deal with crisis and civil unrest.

"He thought Athenian society was corrupt — according to one story, he used to carry a lighted lantern in the marketplace even in broad daylight, and when people asked what he was doing he'd hold the lantern up to their face and say he was searching for an honest man," he wrote. Lewis added that Diogenes, whose father was a banker, was accused of defacing the coinage in his hometown, Sinope, possibly as a political protest, possibly on advice from the Delphic Oracle.

Mark Vernon, author of "Plato's Podcasts," also cited ancient belt-tightening. He listed Epicurus, who "trained his followers specifically for times of hardship by being able to enjoy a glass of water as much as a feast of Zeus"; Zeno, the founder of Stoicism; and Cleanthes the Water-Carrier, "who had to work by night as that is all he could find."

Other aspects of ancient Greek culture echo today's drama. The Benaki Museum in Athens recently hosted an exhibition of artwork inspired by Aesop's Fables. Some visitors pointed out the relevance of the morality tales, and the artist, Manolis Charos, said the stories enjoyed a revival in the United States in the Great Depression before World War II.

"It's relevant to every human situation and deeply political at the same time," Charos said. "In tough periods, people have a kind of necessity to refind the basics of morality."

The tale of the lion, the fox and the donkey addresses the nexus of power and resources, the artist said. The donkey divides food into three equal portions, and gets eaten by the enraged lion. Then the fox divides the food into a big portion and a little one, and lets the lion choose. He tells the lion that he learned how to share from the donkey's fate.

Charos said schoolchildren picked up quickly on the fable of the city mouse that falsely boasts to the country mouse of the good life in the city. The children, he said, had witnessed enough economic hardship in Athens to know the truth.

Karin de Boer, a philosophy professor at the University of Leuven in Belgium, wrote an article about the debt crisis in Greece that draws on an account of tragedy by Hegel, the German philosopher, and "Oedipus the King," the play by Sophocles.

De Boer compared the financial turmoil to the plague that afflicts Thebes in the ancient tale, and suggested some players in today's crisis are in denial, much like the mythical Oedipus. But she said philosophy cannot solve conflict in a modern state such as Greece.

"All it can do is to try to reinterpret the meaning of modernity without negating its utter precariousness — just as Oedipus reinterpreted the meaning of his life just before leaving Thebes as a blind and destitute man," she wrote.