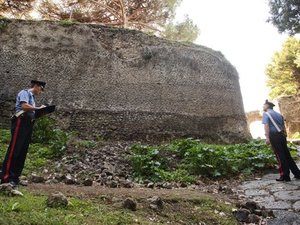 Part of an ancient Roman wall has collapsed at the archaeological site of Pompei in southern Italy following flash floods and storms across the country, a spokeswoman said Saturday.

The wall, built with the Roman "opus incertum" technique using irregularly shaped stones and concrete, collapsed on a stretch of the ancient city's external walls, near the Porta di Nola, in an area open to the public.

An archaeological team is assessing the damage but there is no risk to public safety, the spokeswoman told Agence France Presse.

The collapse happened on Friday, a day after heavy storms lashed Italy, causing flash floods across parts of the country which killed two people, brought the capital Rome to a temporary standstill and left damage in its wake.

"I have publicly said several times how worried I am about the effect that violent rains could have on Pompei," Culture Minister Giancarlo Galan said in a statement released Saturday afternoon.

He said the ministry was working on "a plan to salvage and secure the site" and called on curators "to act immediately to put in place the most urgent security measures", adding that Pompei was the ministry's "utmost priority".

The collapse of a renowned gladiators' house and another wall at the ancient site last year caused international outrage and widespread alarm that the volcano-stricken Roman city had fallen into serious disrepair.

Experts blamed persistently heavy rains for those collapses as well, saying it had worn away the ancient mortar between the stones.

Galan, who was appointed culture minister in March, said he will visit Pompei on Wednesday with European commissioner Johannes Hahn to "unblock European funding of 105 million euros ($145 million) for the site".

Pompei, entombed by a massive eruption of the nearby Mount Vesuvius volcano in AD 79, was partly excavated and is now one of the world's best-preserved ancient sites, attracting some 2.5 million visitors a year.

But the UNESCO World Heritage site has been plagued by problems in recent years and in July 2008 Italy declared a "state of emergency" for Pompei.