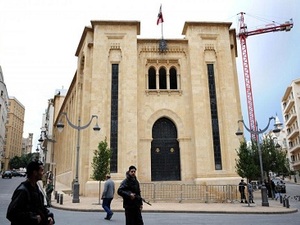 Parliament failed once again on Wednesday to elect a president after quorum was not met during the 25th elections session.

MP Michel Pharaon stated after the meeting: “The paralysis at parliament and at cabinet are spreading to the remaining state institutions.”

Meanwhile, MP Marwan Hamadeh responded to criticism directed by Maronite Patriarch Beshara al-Rahi against lawmakers, saying: “Why are we being lumped in sermons and statements with those who have been boycotting electoral sessions?”

“We have attended all 25 meetings,” he stressed.

The patriarch has repeatedly condemned the presidential vacuum and lawmakers for failing to elect a new head of state.

Ongoing disputes between the rival March 8 and 14 camps over a compromise presidential candidate have thwarted the polls.

The Loyalty to the Resistance bloc of Hizbullah and the Change and Reform bloc of Michel Aoun have been boycotting the elections.

Hey Aoun z Cloun, eventually God's eill and natural causes will contribute to your demise, and eventually all your support to hizb will end.

No matter how the Hezbollah-led M8 will try to delay, no matter what issues they feel are connected to this matter, no matter what they may thing might change in between, the new president will be elected, sooner or later, and that still will not change the fact that it still won't be Michel Aoun who will be elected, nor will it be Geagea. What's going on in Syria will not change course, if uncle Sam has charted its course, so will it be to the letter. It took one day to end Lebanon's 19 year civil war, that same red phone will also give the orders to elect the new president, end of story.

Shia, this is not the real FT.

Patriarch al-Rahi from Amchit: If the MPs had mercy towards their country, they would have headed to parliament and elected a president.

Clown is probably out of the hospital by then....

“The difference between undemocratic and democratic elections is that in the first case wins the most powerful dictator, but in the second case the most capable liar

Somebody asked me about the current choice we're being given in the presidential election. I said, Well, it's like two of the scariest movies I can imagine.