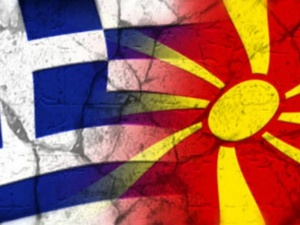 Greece and Macedonia on Wednesday agreed a set of measures to build trust between the two countries, in a bid to solve a 20-year long name dispute that has blocked Macedonian EU and NATO membership.

Athens denies Skopje the use of the name Macedonia -- claiming to have a historical right to it -- and the two neighbors have been in dispute since the former Yugoslav republic proclaimed independence in 1991.

Macedonia has been candidate for European Union and NATO membership for more than ten years, but its progress has been blocked by Athens over the name row.

But Nikos Kotzias -- the first Greek foreign minister to visit Skopje in more than ten years -- and his Macedonian counterpart Nikola Poposki agreed to reinforce communication and consultations between their two ministries.

"We agreed on 11 measures aimed at restoring confidence between our countries and to create a more favorable climate to seek solution for the dispute," Kotzias told reporters after meeting Poposki, without giving further details.

"There are differences concerning the name, but there is a solution for any problem," Kotzias added.

"I am convinced we can solve the name row in the future within the frame of international law and in the spirit of good neighborliness."