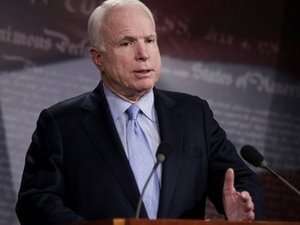 U.S. Senator John McCain raised the prospect Sunday of possible armed intervention to protect civilians in Syria where a crackdown on pro-democracy protests has killed more than 3,000 people.

McCain, the top Republican on the Senate Armed Services Committee, said Syrian President Bashar al-Assad's "regime should not consider that it can get away with mass murder.

Libya's ousted leader Moammar Gadhafi, who was captured and killed on Thursday, "made that mistake and it cost him everything," he said.

"There are even growing calls among the opposition for some foreign military intervention. We hear these pleas for assistance. We are listening to and engaging with the (opposition) National Council," he added.

The United Nations has said more than 3,000 people, including 187 children, have been killed in a fierce crackdown on dissent since mid-March.

"The Syrian revolution may now be entering a new phase. The opposition has formed the Syrian National Council seeking to better organize itself. There are increasing reports of defections from the army," said McCain.

"More Syrians appear to be taking up arms against the regime."

McCain charged that "dark forces in this region, especially in Iran, are working harder than ever to hijack the promise of what many are calling the Arab Spring.

"These concerns are real and legitimate and merit our vigilance."

U.S.-Iran tensions have been running high since Washington accused Tehran of being behind an alleged plot to assassinate the Saudi ambassador in Washington. Iran has denied any involvement.

The United States and Jordan on Sunday signed a $250-million agreement under a "small and medium enterprise loan guarantee program" to support the cash-strapped kingdom's economy.

Ya Bashar......you are under a microscope now. There is no one else left to focus on. Are you shitting your pants yet? You should be. They are coming for you ya Bashar. You are the most deserving of the bunch. They let you slow roast longer than anyone else. When you are dead I will be the one with the biggest fireworks display on the highest mountain. Yalla ya Bashar. Sleep well tonight.

Well said Senator! The military intervention in Syria to stop the blood shed and hold the Genocidal Criminal Assad Family regime accountable by its people can't come a day too soon. At this stage the STC should recognize that without the free world's help as in Libya this conflict can turn into a civil war since people are being massacred on daily basis and cannot but protect themsleves and their families in the end, that could cost thousands of more innocent lives... It might be as good a time as any to finally pull the plug on the life support machine that is keeping this monsterous regime artificially alive and is helping it kill more people everyday. Remember the Assad regime is trying to either play the fear card (divide and conquer communities based on sects) or to make it look like ALL of Syria as a nation would be violated which is not the case his regime alone is the one being targeted not the country as a whole. Dictators often do that, a very old worn out futile trick .

the filthy zionist information war department is happy because someone in usa mentioned invading syria.

Jabal, you are so weak minded it is not even funny...poor you. sure mouamar supporters thought like you a few month ago....

One targeted Assassination on Bashar and the whole game is changed.

The British MI6 are the best at that...

@canaanite
This is what I am expectiong...but from within the regime!

For those willing to take a bet on their master Assad staying in power, I say read history you idiot(s). Your labeling the great Syrian revolution as "terrorist" will not affect the outcome of this matter nor will it delay the inevitable. The dawn of freedom is not measured by days or even years. It takes nine months for a baby to be born and when it does, it is almost instantaneous! The labor pains of freedom in Syria are in motion, and no matter what people like you say or claim or even "bet", you will never be able to change the course of history for one simple reason: you are insignificant!

very interesting, to see this come to fruit

My prayers are with the 187 "terrorist" children assasinated by the Syrian regime!

In an election year, the only way that Obama gets into this is if the Israelis want it. If they do not want to shake Assad out of his tree, trust me, the US will not only refrain but will keep the whole world at bay for the sake of Mr. Netanyahu and his ability to affect the voters in New York, Pennsylvania, New Jersey and Florida.

You're confused! Send a link. It was not me who set a time frame for the collapse of the regime. Ur a waist of my time. Bye bye!

there is no doubt Mowateh is syrian following bashar's regime: no point in discussing with this thug.
he will be silent once his masters are outhrown or killed like Kadhafi :)

i wonder why he is so supportive of a regime that did so many horors in lebanon?
maybe he is proud that thousands of lebanese were killed by them and they continue to kill children who he dare call terrorists!....