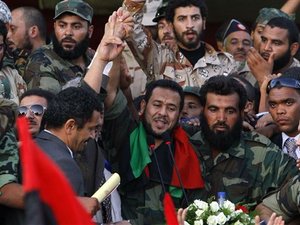 Libya's new leaders on Sunday declared the country "liberated", three days after ousted despot Moammar Gadhafi was captured and killed, paving the way for the formation of an interim government.

The long-awaited declaration came amid raging controversy over the circumstances of Gadhafi’s death after he was taken alive during the fall of his hometown Sirte. Britain said the incident had "stained" the National Transitional Council (NTC).

"Declaration of Liberation. Raise your head high. You are a free Libyan," NTC vice chairman Abdul Hafiz Ghoga told a massive rally in the eastern city of Benghazi, where the uprising against Gadhafi was launched eight months ago.

Tens of thousands of voices echoed him chanting, "You are a free Libyan."

Benghazi's Kish Square was awash with the green, red and black flags of the revolution that toppled Gadhafi, while the formal declaration raised a deafening roar that reverberated across the Mediterranean city.

Interim leader Mustafa Abdul Jalil, in his address, urged Libyans to abide by the law and respect property, reiterating that Islamic sharia law would be the main source of the north African nation's legislation.

Abdul Jalil also gave thanks to NATO and regional allies for their roles in toppling Gadhafi, and paid special tribute to all those who lost their lives in the battle for Libya's freedom.

"I call on everyone to remove hatred from their hearts ... it is essential to build Libya," he added.

Abdul Rahman al-Kabisi, minister of martyrs and the wounded, told the gathering that the event marked "a great historic moment in beloved Libya's history."

"The issue of the martyrs, the wounded and the missing is a priority for Libya's government," he said.

Interim prime minister Mahmoud Jibril said the formation of a new government is expected to take "from a week to a month."

"There are consultations to form a new government and this process would take approximately from one week to one month. It might take longer and or less," he told reporters on the sidelines of the World Economic Forum in Jordan.

"Then there will be real hard work to minimize the period to have elections to elect our national congress, which would be the new parliament instead of the NTC which is going to be dissolved."

Under the NTC's roadmap, an interim government is to be formed within one month of the liberation declaration, followed within eight months by elections for a constitutional assembly -- the first democratic vote in Libya since Gadhafi seized power in a coup 42 years ago.

Parliamentary and presidential elections would be held within a year after that.

Interim leader Abdul Jalil earlier told Al-Jazeera that an investigation was being conducted into the circumstances of Gadhafi’s killing after several foreign governments and human rights watchdogs posed questions.

"We are dealing with the subject with transparency," Abdul Jalil said.

Disquiet has grown internationally over how Gadhafi met his end after NTC fighters hauled him out of a culvert where he was hiding following NATO air strikes on the convoy in which he had been trying to flee his falling hometown.

Subsequent footage shows a now-bloodied but walking Gadhafi being hustled through a frenzied crowd, before he disappears in the crush and the crackle of gunfire can be heard.

NTC leaders are adamant he was shot in the head when he was caught "in crossfire" between his supporters and new regime fighters soon after his capture.

Jibril told the BBC's Hardtalk program that he would rather Gadhafi had survived.

"To be honest with you at the personal level I wish he was alive. I want to know why he did this to the Libyan people," he said. "I wish I were his prosecutor in his trial."

He added in Jordan that he had no reason to doubt the report of the coroner who on Sunday carried out an autopsy on Gadhafi’s body.

"The coroner says in the medical report that he (Gadhafi) has been already wounded, taken out, put in that truck, and on the way to the field hospital there was cross-fire from both sides."

Jibril added he did not know "whether the bullet that hit him in the head came from his own security brigades or from the revolutionaries."

"They took samples of his DNA, blood, hair, face hair ... every sample that was required," he said.

Gadhafi’s body has been stored in a vegetable market freezer in the eastern city of Misrata, drawing large crowds wanting to view and take pictures of the remains of the despot who ruled Libya with an iron fist.

"The fledgling Libyan government will understand that its reputation in the international community is a little bit stained by what happened," he said.

Another NTC official, Ahmed Jibril, told Agence France Presse that Gadhafi’s body would be handed to his relatives.

"The decision has been taken to hand him over to his extended family, because none of his immediate family are present at this moment," Jibril said in Tripoli.