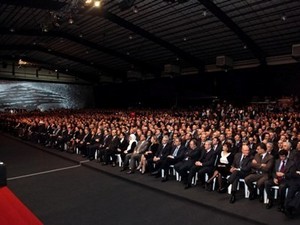 The March 14 alliance elected on Sunday former MP Samir Franjieh as president of its national council during a meeting at BIEL.

Franjieh was the favorite in the race even though other candidates included MP Marwan Hamadeh and Ferri.

Three hundred independent figures of the March 14 alliance were invited to take part in the elections.

Following the polls, work committees will be formed after the approval of an internal system for the national council.

The council will work as a separate entity within t he coalition.

It will include independent figures, who would opt against allying themselves with any political party, according to reports.

March 14 forces general-secretariat coordinator Fares Souaid told VDL (93.3) that “the National Council for the independent figures of March 14 will be free of sectarian restrictions, and is subject to the standards of democracy and keen on transparency.”

Congratulations on the road for democracy and for a peaceful and beautiful Lebanon.

Congrats for Samir, and hope Lebanese a future were it can be a message of peace to us and all the region.

While I am happy, I am also not as hopeful. We have seen it over and over that the bullets of M8 (aka HA) can silence the ideas of M14 - Over dozen such examples since 2005.

Chopper, I understand your concern, but today is 2015 and M8 bullets don't work anymore, M8 is a done force on its way even more down. Not to lose focus, I am one who will greatly encourage that Samir Frangieh be seriously considered for President of the republic, this man has what it takes to lead the nation, I am in no doubt of that.

I am not so sure yet phoenix about the diminishing ability of M8 to use violence for political means. It might be less now than it was a decade ago, but they still are capable of assassinations if they deem it necessary.
Regarding Samir ass Presidential candidate, Amen to that. I like him and his ideas, he is patriotic and a man of convictions.