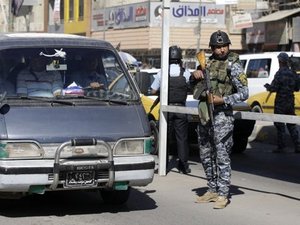 In the deadliest attack, gunmen opened fire on a traffic police patrol near the al-Sarafiyah bridge in Waziriyah neighborhood in the north of the capital on Monday morning.

Three people were killed and one wounded, according to an official at Medical City hospital. An interior ministry official put the toll at four killed and six wounded.

In west Baghdad's Mansur district, a roadside bomb detonated near another traffic police patrol and when emergency responders arrived at the scene, a suicide bomber detonated his explosives vest, security officials said.

One person was killed and six wounded officials from the ministries of interior and defense said.

Officials often provide differing tolls in the confusion that follows attacks in Iraq. All officials spoke on condition of anonymity.

Violence in Iraq is down markedly from its peak in 2006 and 2007, but attacks remain common. A total of 185 people were killed in violence in September, according to official figures.