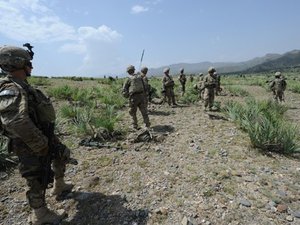 NATO said Monday that about 200 Taliban-linked militants had been killed or captured in major military operations by Afghan and foreign forces on Afghanistan's eastern border with Pakistan.

"As these operations, which were Afghan-led and supported by ISAF, have concluded, we can now say that at least 20 Haqqani-affiliated insurgents have been killed or captured," ISAF spokesman, Brigadier General Carsten Jacobson, told reporters.

About 175 non-Haqqani rebels were also killed or captured, he said, adding that the operations lasted about one week.

The United States has also pushed Pakistan to squeeze the Haqqani network, whose leadership has a base across the border in North Waziristan.

Pakistan denies U.S. accusations that elements within Pakistani intelligence support the Haqqani network, accused over the September 13 siege of the U.S. embassy in Kabul.