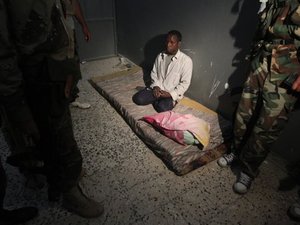 The discovery of 53 decaying bodies in Sirte, final bastion of Libya's ousted dictator Moammar Gadhafi, suggests some of his loyalists were executed, a rights group said.

"Some had their hands bound behind their backs when they were shot," he added.

HRW's investigator found the bodies on Sunday at the Hotel Mahari in District 2 of Sirte, an "area of the city that was under the control of anti-Gadhafi fighters from Misrata before the killings took place."

"The bodies were clustered together, apparently where they had been killed, on the grass in the sea-view garden of the hotel," HRW said in a statement.

An Agence France Presse reporter at the weekend found 60 corpses on the lawn of the al-Mahari hospital and noted that many of the victims had been killed execution-style, a bullet to the head. Some had been bound hand and foot.

NTC fighters told AFP at the time that the hospital had been used as a makeshift prison by Gadhafi's men who, they charged, carried out the executions before abandoning the place.

Similar atrocities were carried out in Tripoli, with at least 50 charred skeletons, apparently prisoners executed by Gadhafi's fleeing forces, being found after the capital fell to National Transitional Council (NTC) fighters late August.

Citing testimony from Sirte residents who played a role in burying and identifying the dead, it concluded that "most" of those killed were likely to be residents of the Mediterranean city and "some" of them Gadhafi supporters.

The watchdog implicated several brigades from Misrata, Libya's third city, who "apparently" held the hotel from before the time of the killings until October 20 when the fighting stopped.

Graffiti on the walls showed the names of five Misrata-based groups, it said.

"If the NTC fails to investigate this crime it will signal that those who fought against Gadhafi can do anything without fear of prosecution."

HRW said that at a separate site in Sirte the decaying bodies of 10 people, also seemingly executed, were found near a water reservoir but the rights group was unable to determine their identities.

"Medical officials in Sirte told Human Rights Watch that pro-Gadhafi forces had carried out executions in the city," the New-York based watchdog said.

The allegations of executions carried out by fighters who took part in the NTC's offensive in Sirte come just days after the unexplained deaths of Libya's ex-leader and his son Mutassim Gadhafi in custody of Misrata fighters.

HRW said it also found the "remains of at least 95 people" who apparently died the day Gadhafi was captured and that at least six of the dead appeared "to have been executed at the site with gunshot wounds to the head and body."

"This latest massacre seems part of a trend of killings, looting, and other abuses committed by armed anti-Gadhafi fighters who consider themselves above the law," Bouckaert said.

"It is imperative that the transitional authorities take action to rein in these groups."

They're no different than Gaddafi himself. Another Iranian revolution in the making!

They got rid of one thug only to be replaced by many....zero civility and total disregard for human life.

Shamefull, but no worse than what U.S. military did to Iraqi civilians when they invaded Baghdad... just ask anyone who had misfortunate of going through an American checkpoint or worse being close of a Blackwater convoy! And let's not forget the dozens of mass graves found in Lebanon after the 1982 Israeli invasion...