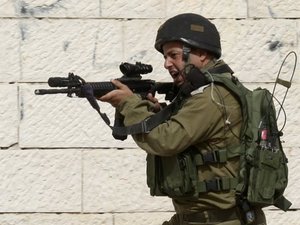 The Israeli military said on Monday it had dismissed from command an officer implicated in the death of a Palestinian in the West Bank last month.

The officer, who was not named, was reportedly in command of the unit that opened fire on Palestinians in the West Bank village of Qusra, killing one, as they clashed with settlers who had attacked the area on September 23.

"The officer was dismissed from his command due to a number of operational and disciplinary incidents," the military said in a statement.

The incident came on the same day that Palestinian president Mahmud Abbas presented his bid for U.N. state membership and raised fears of widespread disturbances across the West Bank, which did not materialize.

Israeli online news site Ynet reported that the soldier was dismissed from his command for "an error of judgment" in allowing his troops to open fire with live bullets in response to stone-throwing in the village.

Qusra resident Issam Badran was killed in the incident by a live bullet that struck him in the neck, according to medical sources at a nearby hospital.

Another three Palestinians were lightly injured by rubber bullets in the same incident in the village, some 15 kilometers southeast of Nablus.

The incident erupted when a group of more than 50 settlers from the nearby outpost of Esh Kodesh entered the south side of the village and began smashing windows and throwing stones, witnesses told Agence France Presse.

The Israeli military said its troops arrived on the scene and "used riot dispersal means and eventually live fire."

Dismissed? He should be tried for cold blooded murder!!!

Samer Hanna would've had justice had he been killed by the Zionists.

Wonder how many officers in PLO, Hammas, Hezballa, or from any Arabian army brought to trial for murdering a Jew.
As contrary to you we consider human lives million times more than you.