U.S. Pulls Ford Out of Syria over 'Credible Threats', Damascus Hits Back 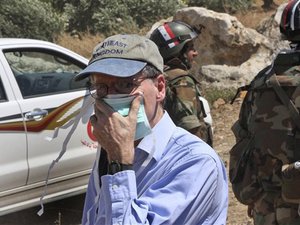 Toner couldn't say when Ford might go back to Syria, saying it depended on a U.S. "assessment of Syrian regime-led incitement and the security situation on the ground."

For her part, a Syrian official said the Syrian ambassador to the U.S. was recalled for consultations.

Roua Shurbaji, a Syrian Embassy spokeswoman, said Ambassador Imad Mustafa left Washington on Monday. She said no other measure was being taken by the embassy.

Ford has enraged Syrian authorities with his forceful defense of peaceful protests and harsh critique of a government crackdown that has now killed nearly 3,000 people. Ford particularly angered Assad's regime in July when he greeted demonstrators in the restive city of Hama.

The ambassador has been the subject of several incidents of intimidation by pro-government thugs, usually in coordination with pro-Assad media capturing the humiliation.

Last month, Ford and several colleagues from the embassy were pelted with tomatoes and eggs as they visited an opposition figure. U.S. officials said the assault was part of a campaign to intimidate diplomats investigating Assad's repression of pro-reform demonstrators. Other such incidents have occurred after meetings with dissident groups or individuals.

Although Assad's government has allowed Ford to remain in the country, it has tried to restrict where he can travel.

He had been in Syria since January after being appointed to the post temporarily when the Senate was out of session.

Kerry said Ford has been steadfast "despite even being physically attacked and assaulted by the regime's goons."

we repeat: 3 bloody weeks coming to syria. the regime is not collapsing,
i think civil war is now inevitable,they will have the monsters they created in bilad el arz....shiah/ain el remmaneh...dekwaneh..tehwita...sodeco ..... aswak.....of course syrian style.

And so it begins for Syria.
Step 1. Recall the US Ambassador.
Step 2. Reprogram the drones.
Step 3. They are coming.
. . .
Step 10. Drag Assad out of the palace, tie him to the back of Range Rover and drag him around the city until he looks like Gadaffi.

When Ahmadinejad says what he said over the weekend about the indiscriminate killings in Syria, Assad is being turned loose. Iran will turn to Iraq as its new Arab partner and Turkey will redo Syria. The Turks have already selected their Syrian counterparts and they are not the Bashar Assad family.

For Lebanon, if the Lebanese tie themselves to Assad they go down with him. Hezbollah is isolated in Lebanon without Syria and as Geagea said, they need a crash course in Lebanese coalition politics with the dialogue door open if they leave their weapons outside the door.

Alla y sé3édon ya Mustapha. Nobody deserves the wars that we have lived through.

No, nobody deserves what we endured, but what can we do?
we endured this regime, and most of our debt is due to their occupation of our country, a lot of our friends and youth died at their hands.....
it is going to be messy especially China backed off already, and Russia will be announcing it soon.
there is going to be a UN resolution for Syria under chapter 7 soon....

Get the hint, on the weekend the Libyans declare freedom and all of sudden Ford departs al shaqiqa. Next and I hope they shut down the US embassy so that the Lebanese US embassy opens its doors for the Syrian citizens (reverse the roles that we endured for 20yrs)

Another kick in the behind of the US. Just like their pupils, the now-defunct March Mehtriyin, they never learned and they will never ever learn. They just stumble around like a blind elephant stepping on and squashing their siblings.

Gabby, I see ASSad and his regime are still there. What's going on my friend? Your three months were up 5 days ago. Did you have a change of plan and forgot to inform us? You little devil you! You must be cooking something, huh! Keeping secrets from your friends? I just wish Dr. Falso learns something from you now that you realized that you have learned nothing from him!!! Keep up the good predictions, my friend.