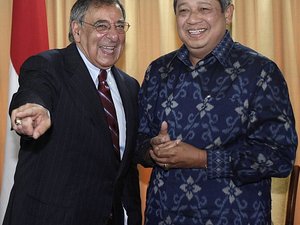 U.S. Defense Secretary Leon Panetta on Monday lashed out at North Korea for "reckless and provocative" acts and criticized China for a secretive expansion of its military power.

Panetta, who arrived at this U.S. air base on the second leg of a weeklong Asia tour, spoke out about North Korea and China in an opinion piece published Monday by Japan's Yomiuri newspaper before his arrival.

He wrote that Washington and Tokyo share common challenges in the Asia-Pacific. "These include North Korea, which continues to engage in reckless and provocative behavior and is developing nuclear weapons and ballistic missiles, which pose a threat not just to Japan but to the entire region," he wrote.

At a question-and-answer session with U.S. and Japanese troops at Yokota, Panetta said that despite coming budget cuts there will be no reduction in U.S. forces in Asia and the Pacific.

On the contrary, he said, the Obama administration intends to "strengthen our position" in the region.

Panetta's strong language comes as U.S. and North Korean officials gather in Geneva for talks that Washington says are aimed at determining whether Pyongyang is serious about returning to nuclear disarmament talks.

Japan also worries about North Korea and is one of five countries that have jointly tried to persuade the North Koreans to cap and reverse their nuclear arms program. The other four are the U.S., China, Russia and South Korea.

"China is rapidly modernizing its military," he wrote in Monday's opinion piece, "but with a troubling lack of transparency, coupled with increasingly assertive activity in the East and South China Seas."

He wrote that Japan and the U.S. would work together to "encourage China to play a responsible role in the international community."

A day earlier, in Bali, Indonesia, Panetta offered more positive remarks about China. He told reporters that Beijing deserved praise for a relatively mild response to a $5.8 billion US arms sale to Taiwan announced in September.

Panetta is not visiting China on this trip, his first to Asia since becoming Pentagon chief in July.