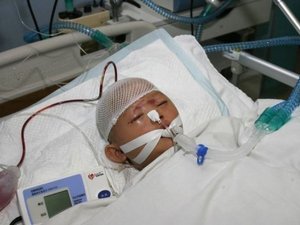 Chinese police have charged a man suspected of running over a two-year-old girl -- who later died of her injuries -- and then fleeing the scene, state media said on Monday.

Surveillance camera footage showing at least 18 people walking past the girl after she was knocked down on a Chinese street has sparked a public outcry and much soul-searching over the state of the country's morals.

Hu Jun, 24, has been charged with causing the wrongful death of the girl, nicknamed Yue Yue, in the southern city of Foshan on October 13, the official Procuratorial Daily newspaper says on its website.

Police in Foshan declined to comment, directing media to the Beijing-based newspaper, which has links to China's top prosecution body.

Earlier reports said a second driver who ran over the girl as she lay bleeding in the street had also been arrested, but the Procuratorial Daily made no mention of him.

Millions of Chinese have gone online to watch the grainy footage of the incident, which took place in a narrow market street in Foshan.

The surveillance footage shows Yue Yue, the daughter of migrant workers, lying in the street for seven minutes before a female rubbish collector moves her to the kerb and calls for help.

Several passersby can be seen stopping to look down at the girl before carrying on, and their failure to help her has triggered speculation the country's rapid development and urbanization has made people more selfish.

China's hugely popular weibos -- microblogs similar to Twitter -- have buzzed with the incident since the video emerged, with many online commentators hailing the rubbish collector as a hero.

But there has also been much soul-searching about why both the drivers who hit Yue Yue and the passersby in China's wealthiest province, Guangdong, chose to leave her for dead rather than stop and help.

Earlier, Foshan police said in a web posting that Hu, who faces three to seven years in prison if convicted, had given himself up three nights after the accident.