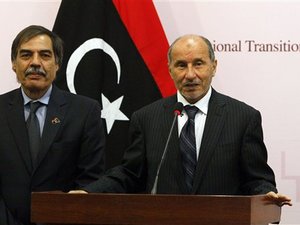 Interim leader Mustafa Abdul Jalil on Monday set a two-week target for Libya to have a new government and said a commission of inquiry is being formed to probe Moammar Gadhafi’s killing.

"We have begun talks (on forming a government), and this matter will not take a month but will be finished within two weeks," the National Transitional Council (NTC) chairman told a media conference in the eastern city of Benghazi.

A day after the NTC's declaration of Libya's liberation in the wake of Gadhafi’s capture and death, Abdul Jalil also said a commission of inquiry is to probe the controversial killing of the fallen strongman.

"In response to international calls, we have started to put in place a commission tasked with investigating the circumstances of Moammar Gadhafi’s death in the clash with his circle as he was being captured," Abdul Jalil said.

And after having raised concern in the West by stressing on Sunday that the new Libya will be governed in line with Islamic sharia law, the NTC chief stressed it would remain a "moderate" Muslim country.

"I would like to assure the international community that we as Libyans are Muslims but moderate Muslims," he said.

The French foreign ministry said Paris will keep a watch over Libya's respect for human rights after the promise of a system of sharia law to run post-Gadhafi Libya.

"We will be watchful of respect for human rights and democratic principles, notably cultural and religious diversity and the equality of men and women to which France is unswervingly attached," ministry spokesman Bernard Valero said.

And EU foreign policy chief Catherine Ashton said the introduction of sharia law in Libya must respect human rights. "We expect the new Libya to be based on respect for human rights and democratic principles," she said.

"Today, we begin preparing for a new phase ... the phase after the liberation, the phase that we will plan and work hard for the future of Libya," said Abdul Hafiz Ghoga, vice chairman of the NTC.

"Let us start work on the adoption of the constitution," he said Sunday as he declared liberation from Gadhafi’s rule at a rally attended by tens of thousands of revelers in Benghazi, birthplace of the anti-Gadhafi revolt.

Under an NTC roadmap, an interim government is to be formed within a month and polls for a constituent assembly to draft a new basic law held within eight months -- the first democratic vote since Gadhafi came to power in a 1969 coup.

Parliamentary and presidential elections would be held within a year after that -- or within 20 months of Sunday's declaration.

However, concerted attempts last month to form a transitional government collapsed due to what Abdul Jalil said were "differences in views" between members of the NTC and the interim executive council.

U.S. President Barack Obama hailed the liberation as a "new era of promise" and urged a "national reconciliation process," while Secretary of State Hillary Clinton said the revolution was the "work of ordinary, brave Libyans."

The long-awaited declaration came amid raging controversy over the circumstances of Gadhafi’s death after he was taken alive during the fall of his hometown Sirte last Thursday.

Disquiet has grown internationally over how Gadhafi met his end after NTC fighters hauled him out of a culvert where he was hiding following NATO air strikes on the convoy in which he had been trying to flee his falling hometown.

Subsequent footage shows a now-bloodied but walking Gadhafi being hustled through a frenzied crowd, before he disappears in the crush and the crackle of gunfire can be heard.

Libya's interim prime minister Mahmoud Jibril said in Jordan on Sunday that an autopsy report showed Gadhafi was killed in "cross-fire from both sides."

But Dr. Othman al-Zentani, who examined Gadhafi’s body, said later only that the dictator had been "killed by bullets" adding: "My autopsy report is not finished."

Gadhafi’s body has been stored in a vegetable market freezer in the eastern city of Misrata, drawing large crowds wanting to view and take pictures of the remains of the despot.

Human Right Watch, meanwhile, urged the NTC to probe the killing of 53 people whose decaying bodies were found in Sirte, where the pro-Gadhafi camp put up its final stand.

"Some had their hands bound behind their backs when they were shot," he added.