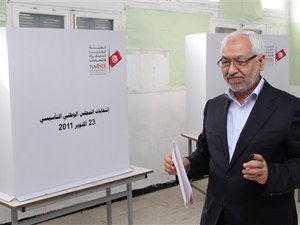 The leader of Tunisia's center-left Progressive Democratic Party, tipped in second place ahead of the country's first free elections, conceded defeat Monday as votes were being counted.

"The trend is clear. The PDP is badly placed. It is the decision of the Tunisian people. I bow before their choice," PDP leader Maya Jribi told Agence France Presse at party headquarters as the Islamist Ennahda party claimed to be in the lead.

Jribi, the only woman to have led a political party in Sunday's elections for an assembly tasked with rewriting the constitution and appointing a caretaker government, congratulated "those who obtained the approval of the Tunisian people".

"We will be there to defend a modern, prosperous and moderate Tunisia," she said, adding the PDP would "clearly be in opposition."

"It is a majority that governs, a minority that opposes," she said.

Ennahda earlier said it expected to capture about 40 percent of the vote.

"We are not far from 40 percent. It could be a bit more or a bit less, but we are sure to take 24 (of the 27) voting districts," Samir Dilou, a member of Ennahda's political bureau told AFP, quoting "our sources".

Analysts widely predicted Ennahda to win the most votes but fall short of a majority on the 217-member constituent assembly.

The body will decide on the country's system of government and how to guarantee basic liberties, including women's rights, which many fear Ennahda would seek to diminish despite its assurances to the contrary.

It will also have interim authority to write laws and pass budgets.

Ennahda says it models itself on the ruling AKP party in Turkey, another Muslim-majority country which like Tunisia to date has a secular state.