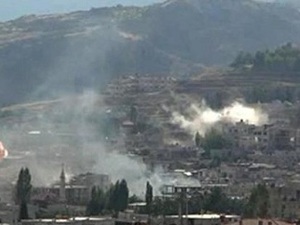 Syrian government forces backed by fighters from Hizbullah entered the town of Zabadani on Sunday in a bid to take the last rebel-held bastion along the Lebanese border.

Syrian state television and Hizbullah's al-Manar station announced the advance into Zabadani on Sunday, a day after a major operation against it began.

"Heroic army forces in cooperation with the Lebanese resistance took control of the al-Jamaiyat neighborhood in western Zabadani and the al-Sultana neighborhood in the east of the city," state television said.

"Operations are continuing with dozens of terrorists killed and wounded."

The Syrian Observatory for Human Rights said regime forces and Hizbullah had entered Zabadani and intense clashes were underway in its east and west.

Army helicopters dropped at least 22 barrel bombs on the town and were also shelling it heavily, said the Britain-based monitoring group.

At least 14 pro-government and Hizbullah fighters had been killed in the past 24 hours, along with at least 12 rebels and a civilian, it added.

The official SANA news agency said it had killed "dozens of terrorists," a term the regime uses to describe its armed opponents.

Zabadani was one of the first towns to fall into rebel hands, in early 2012, and is now the opposition's only remaining stronghold along the Lebanese border.

The town is strategically important for the regime in part because of its proximity to the capital and the highway that runs from Damascus to Beirut.

Zabadani has been under siege for more than a year, and most of the civilians have already fled, according to activists.

Alwan, an activist from Zabadani who now lives outside Syria, said there were still thousands of civilians in the east of the town and many wounded people.

"I don't know what their fate will be," he told AFP.

The town is in the Qalamun region, once an opposition stronghold but mostly recaptured by the regime and Hizbullah in a campaign between late 2013 and April 2014.

You must have misread :) read again and then go mourn your takfiri lovers

@mowaten E-X-C-E-L-L-E-N-T. Still laughing since you made the comment years back you were not shia but rather secular and atheist. That was funny, thank you!

Every time they suffer a big loss(Aleppo), ASSad and Hizbollaat pretend they're making strides in a small town...what good is Zabadani when Aleppo falls to the opposition?

Syrian rebellion? These are all ISIS in Zabandi, why don't you bless them in the open? Why try to wrap it up you coward, just say it plainly.

You support Da3ish against the "Rafidah". Because you live up to your name terrorist.

Zionist ISIS rebellion in Zabadani, you are being broken. Your plans to destroy holy places and destroy the tomb of Sayeda Zeinab sa have all but failed.

You thought Bashar Al Assad would be gone within 2 weeks. He still sits comfortable on his chair while you cowards gets backup by Israel across the Golan fields.

Mythtic no ISIS/Da3ish in Zabadani. According to Al Manar's Sunday nightly news Nusra is there. The same Nusra takfiris that Hezbollah takfiris and ISIS/Da3ish takfiris are fighting. Nasrallah claimed there was no unrest in Syria that was four years ago. Aoun insisted that the regime is going to finish with the unrest by next Tuesday, that was three years of Tuesdays ago. And the Golan are heights not fields. These are your lessons for today they are worth everything you've ever been taught till now, memorizing them makes you the smartest guy in your neighborhood. Give them to southern he'll benifit too.

go get a life troll. You never post anything of value but cheap canned propaganda. Your hizb of murder is defending Damascus and not Beirut.

I'm glad to make you American libtarded Nusra lovers mad, it is ISIS that controlled Zabadani not Nusra and they are the same takfiris anyway. I know you cowards likes Nusra even if they beheaded LAF troops.

I hope Assad will finish all your kind in his country. Days goes by and my no mercy should be shown to you any longer.

an activist from Zabadani who now lives outside Syria, said there were still thousands of civilians in the east of the town and many wounded people.

do they look like ISIS to you? You just simply throw accusations and assumptions that have no basis in reality. If you read, you will learn there is no ISIS in zabadani and the FSA along with its residents are defending it.

There are no civilians in Zabadani. They all left a long time ago, you are still buying that old story with so called FSA? They hardly exist any longer, now they are part if Al Nusra all of them.

Your activist probaly lives in some high class office in London.

So how come you takfiris arrive from all over the world to overthrow Assad? You are supporting Al Qaeda you know that?

Mystic prior to instructing people basic geography you may want to take a very basic English class first as there is no word in the English language called "geographics" however I do appreciate that education is something that is banned to most kizb follower as after it defeats the purpose of keeping you dumb and pregnant which is what the Ayatolla of Rockinrolla wants in Iran. Dumb followers follow blindly....

Geographics is a word, golan heights are field, al manar is wrong and in dahieh truthiness in considered education. It's the mythtic way.

Mystic, personally I will focus only on the military aspect of the matter. Zabadani is a main artery and a lifeline for Damascus itself, just as the Qualamoun is. The regime is losing ground in most fronts in Syria, now to Daesh, now to Al Nusra, now to some of the Islamist groupings, now to the FSA, so what the Syrian regime is doing in view of the losses that it is sustaining, is to retreat together with Hezbollah and Iran to what it considers its strongholds and try to secure supply lines. If you're gloating or celebrating over Zabadani, then it just shows how bad things are overall with the regime, Qualamoun and Zabadani and do or die issues for Bachar, thus has no other choices and you know it. Then could you answer why such a large number of Iranians in such comparatively and seemingly small areas?

Ya phoenix I would like to see you find any moderate rebel in Syria. Go ahead and look around in takfiri controlled areas, remember not to say you are a christian and hide your cross if you wear one. Tayb yallah allah ma3ak

Then my dear Mystic, evidence has surfaced that IS is actually not really fighting the regime but more so the Syrian rebel groupings that are opposing the regime. IS is almost entirely made up of Non-Syrians, whereas the other groupings are mostly Syrians. Things have started changing both on the ground and in the corridors of foreign diplomacy. True, much support went to Daesh from both the West and the Gulf countries, but this is being rectified now with funds and logistics now going to the FSA and the other rebel groupings. Now dear Mystic, I already know that you will deny this or even deride it, but I am telling you what the world is now beginning to know. Anyway, things will clear up as time goes in Syria.