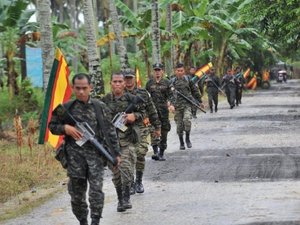 About 10,000 people have fled their homes amid fighting between Muslim rebels and government forces in the southern Philippines, a civil defense official said Tuesday.

The displaced accounts for about one in seven residents of the towns of Payao, Alicia and Talusan on Mindanao Island, home of a decades-old Muslim insurgency, said provincial disaster monitoring Chief Adriano Fuego.

The government said the fighting and the evacuations were an offshoot of a military operation against "lawless elements" engaged in kidnappings, but Muslim rebels have alleged their forces have been attacked as well.

The same group of rebels targeted by the air strikes was blamed for ambushes that killed four soldiers and four policemen in the same general area on Thursday last week.

At least 35 people have been killed in Mindanao and Basilan in a week of fighting.

Military spokesman Lieutenant Colonel Randolph Cabangbang said Tuesday soldiers and police were advancing on the ground on the gunmen, who were hidden in bunkers and trenches and believed to be holding a local businesswoman hostage.

"There are no air strikes (today)," he told AFP. "What we have now is clearing operations."

The operation is against Juaning Abdusalam, the alleged brains of several kidnappings in the area, army spokesman Major Harold Cabunoc said.

He stressed that most civilian residents around the gunmen's positions had fled before the fighting began.

"What is happening now is that air raids are continuing since yesterday," Jaafar told AFP in a telephone interview, contradicting Cabunoc, the national army spokesman.

"We have ordered our fighters on the ground to stand down and respect the peace process," Jaafar said.