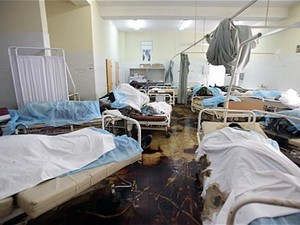 Amnesty International has condemned what it calls the "climate of fear" in state hospitals of unrest-strewn Syria where both patients and medics were being targeted.

"The Syrian government has turned hospitals into instruments of repression in its efforts to crush opposition," it said in a 39-page report released late Monday.

Amnesty documented how wounded patients in at least four government-run hospitals had been subjected to torture and other ill-treatment, both by medical workers and security personnel.

And "hospital workers suspected of treating protesters and others injured in unrest-related incidents have themselves faced arrest and torture," it said, leaving them in a dilemma.

Amnesty said a health worker who witnessed a raid by security forces told of how at least one unconscious patient had had his ventilator removed before being dragged off.

"Afraid of the consequences of going to a government hospital, many people have chosen to seek treatment either at private hospitals or at poorly equipped makeshift field hospitals," it said.

Doctors at the National Hospital in the flashpoint central city of Homs told Amnesty that admission for firearms wounds had slumped since May, despite the spiraling casualty toll out on the streets.

"Syrian medical workers are being placed in an impossible situation - forced to choose between treating wounded people and preserving their own safety," said Amnesty.

A crackdown on anti-regime protests in Syria since mid-March has left more than 3,000 dead, according to the United Nations.