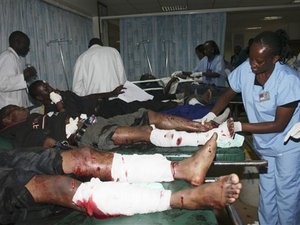 Grenade blasts at a blue-collar bar and a crowded bus stop rattled Nairobi, as the country worried whether al-Qaida-linked militants from Somalia were carrying out their promise to launch reprisal attacks in Kenya's capital.

The attacks on Monday came only two days after the U.S. warned of "imminent" terror attacks.

The U.S. warning had implied that the Somali group al-Shabab would carry out reprisals in response to Kenyan troops' invasion of Somalia in mid-October. The militants had promised to unleash terror attacks in Nairobi in retaliation for the offensive.

Authorities said it was too soon to name suspects in either blast, though the small-scale blasts targeted Kenyans rather than foreigners as the U.S. warning had suggested.

Al-Shabab is loosely affiliated with al-Qaida and has carried out several sophisticated suicide attacks, including a bombing that killed more than 100 in Somalia's capital earlier this month and an attack in Uganda's capital that killed 76 people in July 2010.

One Nairobi-based security official, who is not allowed to be quoted by name, said al-Shabab has bombing "down to a fine art." Throwing grenades, he said, is not their style, though the fact the attacks came so close to the U.S. Embassy warning was hard to ignore.

The first grenade blast toppled chairs and tables at a blue-collar bar near downtown Nairobi around 1:15 a.m. Monday, wounding 12 people. Later in the evening, a blast went off as throngs of people crowded the sidewalk and tried to jam their way onto raucous mini-busses known as matatus, the primary mode of transportation for Kenya's working class.

The Red Cross said one person was killed and eight wounded in the second attack. Peter Ndungu Kiarie, 35, said he was in his vehicle when he heard the second explosion and saw people rushing toward him. Many people were wounded in the legs, he said, suggesting the grenade was lying on the ground.

Police have tightened security around hotels, bridges and fuel depots, police said. But the two attacks spurred debate over al-Shabab's involvement — and what might happen next.

"This was the al-Shabab. Maybe they wanted to strike earlier in the day or week but the saw that there was a lot of security was tight. I think it is an act of desperation targeting this pub in the backstreet of Nairobi," said resident Peninah Ndinda.

Eric Agade, a 30-year-old restaurant worker, disagreed: "Somebody is taking advantage of the situation. This is not al-Shabab. Al-Shabab will target somewhere big. This is such a small target."

Nevertheless, the attacks are bound to have a profound effect on Nairobi residents' feeling of security. Josphat Karuri, 42, the owner of a liquor store across the street from the attacked pub, said he expects to lose business, though he supports Kenya's military incursion into Somalia.

"It has created a lot tension and fear. Like now that I have opened there are no customers. Usually at this time I am normally busy," he said Monday afternoon. "I think Kenya is totally right pursuing the al-Shabab. ... We are worried that they may strike back but even though the worry is there we need to flush them out. If we keep quiet they may hit harder."

The weapon used in the early Monday attack was a Russian-made F1 grenade, police said. A similar type of grenade was used in a downtown Nairobi attack in December 2010 at a bus station. That attack killed one person. Three grenades exploded at a political rally in downtown Nairobi in June 2010, killing six people. In December that year, two traffic police died when they were shot and a third was seriously injured by a grenade.

In other developments on Monday, France said it would ferry supplies to Kenyan troops fighting al-Shabab. The announcement of the French assistance, made in Paris by a military spokesman to The Associated Press, marks a significant step-up of international involvement in the fight against al-Shabab.

The group has been rocked by an offensive by African Union forces that reclaimed control of parts of Somalia's capital, Mogadishu, in recent weeks and by Kenya's military intervention, which began in mid-October after Somali gunmen kidnapped four European women in Kenya, one of whom later died.

In Somalia, residents in a southern town reported that military aircraft had flown overhead and likely dropped ordinance. It was unclear to what nation the warplanes belonged.

Burkhard said French transport planes will fly supplies from Nairobi to an airport in northern Kenya beginning Monday or Tuesday, and that the operation would be "limited in scope."

In a sign of the political complexities surrounding Kenya's operation, the Somali president said Monday that the Kenyan military incursion is "inappropriate and unacceptable," contradicting a statement from both governments last week that they were working together.

"We welcome our collaboration with Kenya, but there are inappropriate things going on now. We want Kenyato help our troops, but don't want its troops just entering into Somalia. The Somali government and our people will not accept that," said President Sheik Sharif Sheik Ahmed.

Analysts have long said that the Somali government, which currently only controls the capital, is wary of any potential rivals for its international patronage. It is also worried that Kenya might install its own administration in Kismayo.