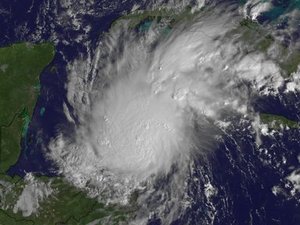 A Nicaraguan naval vessel on an evacuation mission went missing Monday in the Caribbean with 27 people on board as nearby Hurricane Rina took aim at the tourist resort beaches of Belize and Mexico.

Nicaraguan President Daniel Ortega had ordered the ship to remove people from flood-prone coastal areas but contact was lost after four sailors had picked up 23 fishermen, the nation's military said.

"The chances of finding them alive are good because they all wore life jackets and swim," civil defense chief Lieutenant Colonel Freddy Herrera told Agence France Presse by telephone separately.

The navy boat was one of three vessels that had set out to help evacuate indigenous Miskito residents from Sandy Bay, a coastal town north of the provincial capital Bilwi, close to where the fishermen were picked up.

Driving rains have drenched Nicaragua for the past 12 days leaving 16 people dead, and an estimated 150,000 homeless or evacuated, though the hurricane has started to move away from the Central American country.

"We are asking the Lord to help us save the lives of these people... and for them to get into port safely," said First Lady Rosario Murillo, who is also the government spokeswoman.

Rina strengthened into a hurricane on Monday in the western Caribbean, threatening to bring heavy rain and strong winds to an already waterlogged Central America and Mexico's Yucatan peninsula, U.S. forecasters said.

It is now likely to barrel into Belize and Mexico's popular tourist coast on the Yucatan by the end of the week, the Miami-based National Hurricane Center said.

Rina, currently a Category 1 storm on the five-level Saffir-Simpson wind scale, could become a major (Category 3) hurricane by late Tuesday, it said.

The hurricane is packing maximum sustained winds near 120 kilometers per hour, with higher gusts, the NHC said.

The sixth hurricane and 17th named storm of the Atlantic hurricane season was heading northwest at 5 km/h, and is about 195 miles southwest of Grand Cayman island and 360 miles east of Chetumal, Mexico.

The NHC forecast that Rina would head directly over the popular Mexican tourist island of Cozumel and huge beach haven of Cancun on Friday.

The U.S. agency urged authorities in the Yucatan peninsula and in Belize to closely monitor the storm's path and send out warnings when appropriate.

Central America is still struggling to recover from recent torrential rains that triggered deadly flooding and landslides, swamped huge swathes of farmland, and caused hundreds of millions of dollars in damage.

More than 100 people across the region were killed, including 36 deaths in Guatemala, 34 in El Salvador and 18 in Honduras.

The rains have seen agriculture suffer massively in Central America, where half of the region's 42 million population is considered poor and suffer from malnutrition.

A string of countries from the region intend to request aid from nations attending U.N. talks on climate conference in Durban, South Africa next month.