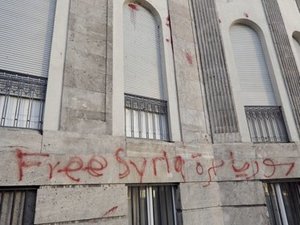 The Syrian government has detained more than 30,000 people since launching a deadly crackdown on opposition protests in March, a leading Syrian rights activist said Monday.

President Bashar Assad's government has turned all the country's main football stadiums into prisons, Radwan Ziadeh, co-founder of the Damascus Center for Human Rights and scholar at George Washington University in Washington, told a press conference at the U.N. headquarters.

Speaking at the launch of the Observatory for the Protection of Human Rights Defenders annual report, Ziadeh said nobody knew the exact figure for the number of detainees.

The United Nations says that more than 3,000 people have been killed.

Based on reports from activists working underground in Syria, Ziadeh said: "We have an estimate number that more than 30,000 have been detained."

"My brother is in prison since August 30 and I have no information about him." He added that he also had no news of an uncle and three cousins, one of them 14 years old, who had also been held.

"You can imagine, five relatives only from one family in one small city. This is why the number that has been detained -- 30,000 -- is an estimate number," said Ziadeh, who has been condemned by Syrian media close to the country's president.

"The Syrian regime actually cancelled the football championship because they turned over all the soccer fields to be detention centers and torture centers," he said.

The al-Fayhaa stadium in Damascus, the Assad stadium in Latakia, the main stadium in the city of city of Daraa were being used to hold thousands of prisoners, said Ziadeh.

Ziadeh said that the U.N. Security Council's failure to pass a resolution on the Syria crisis had made opponents of Assad more desperate and more ready to use guns "to defend themselves against the security forces."

Russia and China vetoed a proposed European resolution on Syria, saying there should be no threat of sanctions against Assad.

Western powers again criticized the veto at a council meeting on the Middle East on Monday.

France's U.N. ambassador Gerard Araud said that tens of thousands of activists were being held in secret in Syria.

Araud said that those who vetoed the resolution or abstained must explain to the Syrian people and international opinion "what concrete action they propose to end this blood bath."

"It is tragic that Assad’s barbaric acts have recently been met by silence from this council," added U.S. ambassador Susan Rice.