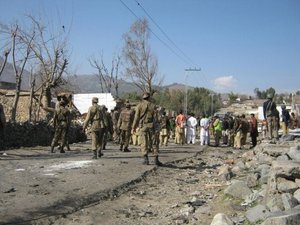 A roadside bomb targeted an anti-Taliban militia member in northwest Pakistan on Tuesday, ripping through his vehicle and killing four people, police said.

The blast badly damaged the militiaman's car in a remote village in the district of Lower Dir, where Pakistan launched a major operation designed to dislodge a Taliban insurgency in 2009.

Sponsored by the government, tribesmen across the northwest have set up militias in a bid to drive the Taliban out of their communities.

"It was a remote-controlled IED (improvised explosive device) which exploded when the vehicle passed. Two people passing near by the car were wounded," said Marwat.

Another police official said the victims were travelling from their home village of Ghundo to the Samar Bagh area, 60 kilometers northwest of Timergarah, the main town of Lower Dir.

Nearly 4,700 people have been killed across Pakistan in attacks blamed on Taliban and al-Qaida-linked networks based in the tribal belt since government troops stormed a radical mosque in Islamabad in 2007.