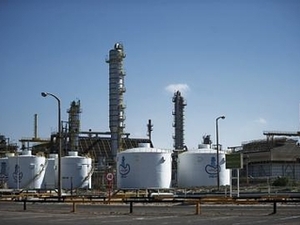 A fuel tank exploded in Moammar Gadhafi's hometown Sirte killing more than 100 people less than a week after the deposed despot was captured and killed there, a military commander said on Tuesday.

"There was an enormous explosion and a huge fire. More than 100 people were killed and 50 others wounded" in Monday night's blast, National Transitional Council commander Leith Mohammed told Agence France Presse.

He said the scene was "a heart wrenching spectacle with dozens of charred bodies."

The explosion happened as a crowd of people waited near the fuel tank to fill up their cars.

"We are still unable to put out the fire," Mohammed said.

Some of the victims had returned to the town, the last bastion of resistance by Gadhafi loyalists, which fell on Thursday, to inspect the damage to their properties, the NTC commander added.