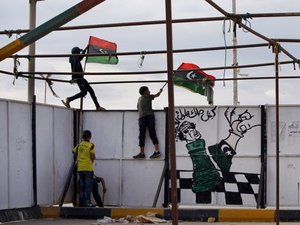 Iran's foreign minister, Ali Akbar Salehi, has sent a message to the new leaders of Libya hailing "the total liberation of the country," the Mehr news agency reported Tuesday.

Salehi said he hoped the Libyan people would exercise their sovereignty by "installing a regime based on religious democracy while preserving the independence and stability of the country with no influence or interference by foreign forces."

The comments were made in a message addressed to Libya's interim leader, Mustafa Abdel Jalil, Mehr said.

Abdel Jalil on Monday stated that Libya would remain a "moderate" Muslim country, after having raised concerns in the West on Sunday by stressing that Islamic sharia law would prevail.

Iran, which uses a form of sharia law as the basis of its legal system, backed the revolt against Libya's toppled, late leader Moammar Gadhafi, though it did not formally recognize Abdel Jalil's National Transitional Council and was opposed to the NATO intervention.

Iranian foreign ministry spokesman Ramin Mehmanparast on Friday welcomed the death of Gadhafi, saying it removed any "pretext" for NATO to continue its air operations in Libya.

will they do the same once the assad regime will fall after he meets the same fate as kadhafi? :)