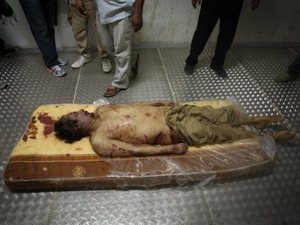 A Misrata military council official said Moammar Gadhafi, his son Muatassim and a top aide were buried at dawn Tuesday in a secret location, with a few relatives and officials in attendance.

In a text message shown to The Associated Press, spokesman Ibrahim Beitalmal said Islamic prayers were read over the bodies. The information could not be independently verified.

The bodies of Gadhafi, his son Muatassim and former Defense Minister Abu Bakr Younis had been held in cold storage in the port city of Misrata since the dictator and members of his entourage were captured near his hometown of Sirte on Thursday. Gadhafi and Muatassim were captured alive, with some injuries, but died in unclear circumstances later that day.

On Monday, Beitalmal had said the three would be buried in unmarked graves in a secret location to prevent vandalism. Presumably, the graves would also be kept hidden to avoid turning them into shrines for Gadhafi loyalists.

International organizations asking to see the burial site would be given access, Beitalmal said.

Over the weekend, Libya's chief pathologist, Dr. Othman el-Zentani performed autopsies on the three bodies and also took DNA samples to confirm their identities. El-Zentani has said Gadhafi died from a shot to the head, and said the full report would be released later this week, after he presents his findings to the attorney general.

It remains unclear when exactly Gadhafi suffered the fatal injury — before he was taken into custody or after he had been captured by revolutionary fighters.